AACHEN, Germany--McLain Ward had just flown in to Germany, but he didn’t need an airplane on June 29 to fly to victory in the Turkish Airlines – Prize of Europe. 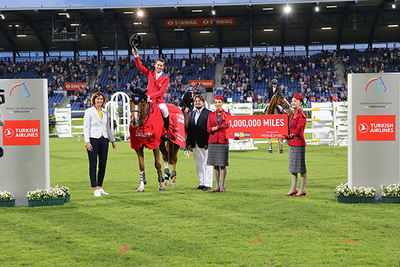 Mclain Ward at the presentation in Aachen (CPhoto by Michael Strauch)He had Contagious.

And the pair left first and foremost the number one in the world rankings trailing behind them in the first major jumping class at the CHIO Aachen 2022.

When the number one in the world ranking list, the Swiss show-jumper Martin Fuchs reached the finish line in the Turkish Airlines – Prize of Europe with his 11-year-old Holstein-bred gelding, Conner Jei by Connor in a time of 41.48 seconds, one actually had the feeling that it wasn’t possible to ride faster.

BUT THEN came McLain Ward on Contagious, the team silver medallists from Tokyo.

He had so often come second or third in the major classes at Aachen, said Ward.

And today he wanted to give it his best shot.

And with his Baden-Württemberg-bred Contagio-son he had saddled the right partner – “incredibly careful with a huge heart”, is how Ward describes him.

And Contagious galloped as fast as he could and actually managed to knock seven hundredths of a second of Conner Jei’s time. Which was something very special for Ward:

“I remember that I have come here for many years and saw how one of my mentors won the Turkish Airlines-Prize of Europe, and I always thought one day I will win it too" said Ward. "And now, 27 years later, the time has finally come. Contagious was simply fantastic. I think it is a class that each of us dreams of winning one day. You know, Aachen is the best show in the world for us, which means the most to us riders, and the Rolex Grand Prix, the Mercedes-Benz Nations´ Cup and the Turkish Airlines-Prize of Europe are the competitions with the longest tradition, the main events. Which is why it is very important for us and a big honour for me.”

“He’s grown into an incredible horse," said Ward. "He was always been a good horse and a trier. We thought he would be a good Grand Prix horse because he has a huge heart, but he’s really done some great things in the sport and has had a lot of great moments but has a lot of great moments left in him too. When he goes in the ring, he builds himself up and he believes in me, I think. He throws his heart over first and he’s really done remarkable things, not things I imagined we would at the beginning of our partnership, but it’s because he believes in what we do and gives his all every time we enter the ring.”

Spencer Smith on Untouchable 32 also qualified through to the second round of the competition in the top 15 and finished 13th overall in the class.

Fuchs would have like to have swapped places with Ward.

“Of course, I was a bit annoyed at first, because it was so close," said Fuchs. "But now I am really happy! I had a super jump-off; I couldn’t have done anything more and everything went exactly according to plan. But McLain is simply the best jump-off rider in the world, and he proved again today why that is what I call him.”

An unforgettable first “real” show day in Aachen came to an end for Conor Swail in the evening, after already winning the Prize of StädteRegion Aachen in the afternoon.

It is the Irish rider’s debut in Aachen, and as he already said this afternoon, he travelled here specially from Spruce Meadows.

This time he had saddled his top horse, Count Me In, a pair that have notched up many victories over the past months, and he was clear in a time of 44.92 seconds to finish third.

“So far, it has been a good decision to come here,” said Swail.

There was a special surprise for the winner: A CHIO Aachen NFT that resembles his Contagious.

In dressage, Adrienne Lyle on her Olympic mount Salvino was second to Catherine Dufour in the Grand Prix.

Dufour and her European Championships silver medallist, Bohemian, won the Grand Prix, the HAVENS Horsefeed Prize 2022 with a score of 80.413 after a wonderfully harmonious ride.

“Salvino feels great. With no spectators in Tokyo, it’s been a while since we’ve been in such a big atmosphere and he was quite enthusiastic in there today,” said Lyle. “We’re both so happy to be back here at this incredible show and I’m really looking forward to riding our freestyle under the lights on Saturday, which is an experience I’ve never had here. I’m already looking forward to tomorrow and cheering on our other American athletes in the Nations Cup!”

The U.S. was represented by two riders in the FEI Prix St. Georges, with Ashley Holzer on Bliss scoring 71.853 percent to finish fourth, while Charlotte Jorst on Zhaplin Langholt was fifth place with a score of 71.647 percent.