MADRID, Spain--Despite Rebecca Conway being eliminated in the first round, she and her teammates Alex Matz on Cashew CR, Daisy Farish on Gerko and Charlotte Jacobs on Edocenta managed to pull out a sixth place finish out of 10 teams in the Nations Cup in Madrid on June 3. 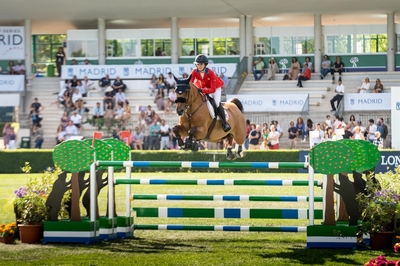 Charlotte Jacobs on Edocenta (Photo by EquusMedia)The U.S. Jumping Team concluded a two-week tour of Europe with its finish in the FEI Jumping Nations Cup of Madrid CSIO3*, finishing with a final overall score of 16 faults.

The team was led by Chef d’Equipe Anne Kursinski over the course of their two-week stay, with their first appearance coming at the FEI Jumping Nations Cup of Portugal last week before traveling to Madrid to contest the competition this week at the Club de Campo Villa Madrid this weekend.

The team in Madrid included Jacobs of Aurora, N.Y., Farish of Versailles, Ky., Conway of Wellington, Fla., and Matz of Coatesville, Pa.

First to go for the team on Edocenta, Jacobs was clean within the time allowed to start the team off strong in the first round.

THE COURSE, designed by Isabel Fernandez de Cañete of Spain, was set on a beautiful grass field featuring 15 jumping efforts and an open water jump.

“I think in these two weeks they’ve grown so much. It’s a wonderful opportunity to be able to do these two weeks back-to-back at such impressive venues,” said Kursinski. “It’s the experience of riding. None of these riders have been on a team before other than maybe at Young Riders, and it’s their first real experience putting on the pinque coat. There were some first-time jitters, and that’s something they have to get under their belts to be better. Seeing their confidence grow over the two weeks, with the travel, the management, all of the aspects of being better horsemen and women on the road and adding in the team camaraderie component like going to the ring for each other is really special and it’s the true developmental aspect of it.”

Farish on Gerko was the second to go for the team and had two rails for 8 faults, but Conway on Con Coleur had two stops for  elimination.

As the anchor combination and without a drop score available to the team in the first round, Matz on Cashew CR had 4 faults, after finishing in 75.05 seconds, for an overall first round total of 12.

Jacobs had a calculated second trip, barely rubbing the out combination of the two-stride to add 4 faults and a time fault after crossing through the timers in 80.55 seconds.

Farish was clean in 75.75 seconds, and then Conway produce the second consecutive clear round for the team after her earlier elimination.

Finishing the round for the team, Matz and Cashew CR, produced one of the fastest rounds of the day, taking nearly three second off their first-round time, to cross the timers in 72.94 seconds and adding a single rail to their final effort for the team.

Dropping the five-fault score of Jacobs in the second round, the team concluded the competition on a total of 16.

The home country of Spain won with 0 faults, with Belgium finishing in second with 4 faults and Ireland third with 8 faults.