LANGLEY, British Columbia--The U.S. Jumping Team finished fifth in the FEI Jumping Nations Cup of Canada CSIO5*, the third competition to decide the North American team that would compete on the Nations Cup Final in Barcelona later this year. 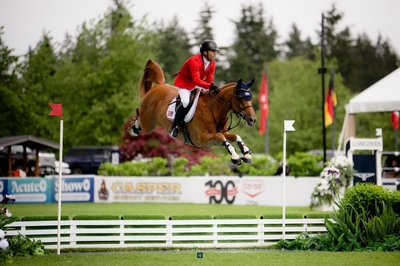 Kent Farrington on Landon (Photo by Quinn Saunders Media)That decision had already been made prior to the Nations Cup in Canada, as this year there were only two competitions used to determine the teams for Barcelona, and the U.S. team has been disqualified in the Mexico Nations Cup, meaning the U.S. had no way to qualify for the Finals.

With that in mind, chef d'equipe Robert Ridland led a team designed to give experience to three young riders and one veteran rider giving experience to a young horse.

Ireland finished first on a final score of five with Mexico taking the silver on 13 faults, and Australia following in third on 22 faults.

The team led by Ridland, which included Karl Cook, Ailish Cunniffe, Kent Farrington and Hunter Holloway, started second in the order of six international teams to take to the manicured main arena of Thunderbird Show Park outside of Vancouver, B.C., over a course made more difficult by the steady rain.

“WE CAME here with an emphasis on getting experience," said Ridland. "Kent had a great show and won some of the 5* classes, including the Grand Prix, and he was the lead-off rider with a young horse competing at this level for the first time. The other riders came for their own experience and growth, and you have to learn from it. It was productive in that aspect, but it wasn’t the result we were looking for.”

“It’s what we’ve been emphasizing, and we’re giving a lot of riders their initial experiences in Nations Cup competitions early on in their careers and truthfully, it’s a big adjustment, jumping two rounds at 1.60m with the water," said Ridland. "It’s the sport at a different level, so you have to experience it, and that was and is our goal. The results are a byproduct of everything that happens, but the main emphasis was experience and we got that today.”

Farrington of Wellington, Fla., the most seasoned rider on the team, led off the order on Landon, going clean to start the team off on a strong note.

Farrington was efficient and careful around the 1.60m track set by Peter Holmes of Canada, which featured 15 jumping efforts on grass footing, creating a challenge with the unpredictable weather of the afternoon.

As the second in the team order, Holloway of Topeka, Kan., on Pepita Con Spita had two rails to add 8 faults in her debut for the U.S. Jumping Team.

Cook of Rancho Santa Fe, Calif., on Coachella,was eliminated in the first round after a stop at the water and elected not to return for the second round of competition, putting even more pressure on his three team members.

Cunniffe of South Salem, N.Y., in her second appearance in 2022 for the team, anchored on Vivaldi du Theil, and added another 8 faults to the score, moving the team forward to round two on a total of 16 faults.

Returning for their second trip, Farrington looked strong through majority of the course, but dropped the final two fences, adding 8 to the team’s score of 16 carried over from the first round.

Holloway improved on her results from the first round, finishing with 4 faults.

As the final combination for the team in the second round, Cunniffe again had 8 faults, with the team finishing on a final total of 36 faults.

Canada was fourth on 28 faults, followed by the U.S on 36 and Isreal, eliminated.

The next appearance for the U.S. Jumping Team will be at the Aachen CHIO as the team defends its title in the Mercedes-Benz Nations Cup CSIO5*.

Aachen also serves as the second observation site for choosing the team for the World Championships.