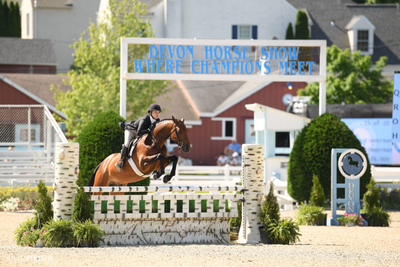 Martha Ingram on Quimby (Photo by KIND Media)Ingram amassed a total of 34 points winning both of the over fences classes Friday, as well as the under saddle and third in Saturday’s stake round.

Ingram was the Leading Amateur-Owner Hunter Rider for the highest number of points on a single horse through the division.

“It’s huge,"said Ingram of being the Devon Grand Amateur-Owner 3’6’’ Hunter champion. "This is my first time being champion in the Dixon Oval doing the Amateur-Owner 3’6’’ division and first time being back since 2014 so it’s really unimaginable. I know [uimby]has the talent, and I do, but for it to become a reality is pretty amazing. I couldn’t ask for anything more.”

“Quimby was amazing," she said. "Our handy round was quite good, we just hit the second jump really hard so that knocked us out. His stake round was wonderful and ended up third place to seal it up. The courses rode great all week and it was lovely.”

“IT WAS great to get the reserve champion with Private Practice too," she said. "We didn’t have a great day yesterday but it was a blessing in disguise because it made me calm down and realize, at the end of the day, even though it is really special, it’s another horse show. Of course it’s always great to get tricolors and all the awards. I’m just really proud of my horses, myself and my team for buckling down and getting it done. It was wonderful Grace  (Debney, who rode Quimby in equitation) could be here to watch. She’s amazing and rode him unbelievably.” 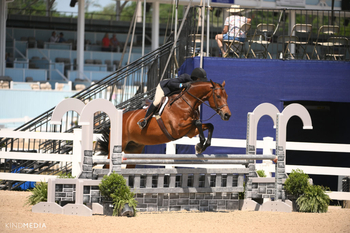 Stephanie Danhakl on Quest (Photo by KIND Media)In the Grand Amateur-Owner 3’3’’ Hunter division, Danhakl on Quest, had a total of 27 points, winning  both the over fences and under saddle classes, and second in Saturday’s handy as well as fifth in the stake Saturday.

It was specially meaningful to Danhakl as she was the reigning champion in 2019 with Enough Said, who passed away earlier in the year.

“I’ve had Quest for over nine years now," said Danhakl. "He’s been a wonderful horse for me, year in and year out. I’ve won this championship with another horse, Enough Said, who was the grand champion three times before. He passed away on new year’s day this year, and it was very unexpected, he had a heart attack. He had prequalified and I was looking forward to showing him again, so after he passed I didn’t really even know if I was going to qualify because I just had a baby four months ago, so I took a lot of time off from riding and showing. I know Quest is the best horse in the division and he was always neck and neck with Enough Said, so for him to win this is really special. I feel like Enough Said was looking down on us and bringing us good luck. I was hoping to defend Enough Said’s title this year and I couldn’t be more thrilled that everything worked out and that we did it.”

“It feels great to be back here," she said. "I thought everything rode nicely. I just try to stay consistent. Of course I want to win but the most important thing is just riding each jump, so I just try to do that in every round. Quest was great.

:
“I love the atmosphere here, the fair, the shops, the people, the crowds, it’s really fun to be able to compete in this kind of environment," said Danhakl. "For me, I’m a little bit of an adrenaline junkie so I love the pressure. There is no horse show that is more pressure than this one just because you have so many spectators. For me that’s really fun to be able to try to test myself when it does matter and the stakes are high. I’m really lucky to have a partner like Quest that can be right there with me and I can count on.”

“We’re going to Upperville and then maybe Brandywine which is at this venue again, then the Hampton Classic and hopefully indoors after that,"she said. "This is the first time Quest has been champion and grand champion here, so I’m really proud of him. He deserves it, he deserves all the recognition and I can always rely on him.”