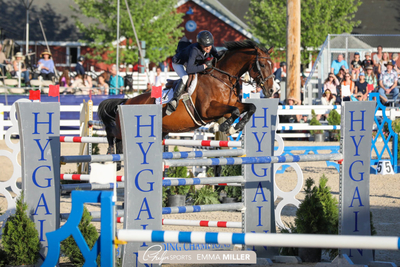 Laura Chapot on Diarado's Flying Dutchman (Photo by Emma Miller)Chapot had the only clean round over Olaf Peterson Jr.'s challenging 13 fence course.

The course proved so difficult that, between rails down and time faults, all the rest of the 23 competitors had even more than 4 faults.

“With Flying Dutchman, I usually have a different plan than I normally would for most of my horses," said Chapot, who was also 11th in the class on Chandon Blue. "He’s really very bouncy, so it’s really easy for him to add strides. During the last two classes that I showed in here he was a little bit backed off going down the sides of the ring by the crowd, so he was staring at them a little bit. I knew coming to that one line that was by the crowd, I was going to add a stride to the combination so he had time to really think there. I don’t know if anyone else did that, but it wouldn’t have been a normal plan for any of my other horses, but I know for him he’s just so easy to bounce up a stride and then he has time to process the jumps."

"I THINK with him, my thought is to keep him thinking about what he’s doing and not getting overly excited," she said. "He’s got all of the ability to do it, he just has to take his time when he gets there. The shadows do play a part. The Hygain fence, the second to last jump, really caught a lot of people. I noticed coming to it, the sun was really glaring off that jump. I think that made it really hard because it’s difficult for the horses to judge that. Olaf always builds very good courses ,and I really enjoy them because they are very fair. They aren’t tricky, he just builds challenging things and questions to solve but there is nothing trappy.”

“This will mark just over a year and a half that I’ve had this horse," said Chapot. "It’s been a lot of getting together and him knowing my way and me figuring him out. Even though he has a lot of energy, he’s not the typical horse for me. A lot of my horses tend to be more long strided and always leaving out the strides. With that horse, it’s a little bit the opposite approach. Even though he has a big stride sometimes it’s better for him to just take a little bit more time. He has so much adjustability, I know I always have to think about what’s the best thing for him rather than my normal ride that I like to do. He really has a lot of talent and it’s just a matter of making it more consistent. When I got him, he really hadn’t done all that much. He’s really starting to become a lot more rideable and more into my style of going.”

“It’s so great to be back, and it’s nice to see the crowds come out for all of the competitions," she said. "It’s a different venue than we ever get to see anywhere else. It’s nice to be here and I hope we’re back next year!”

The Chapots have a very long history of winning at Devon, going back to Frank Chapot's many victories, often on Good Twist, one of whose descendants, Zealous, placed in Adult Jumpers at Devon this year.

Two of the most important trophies presented on the final day at Devon were donated by siblings Wendy and Laura after they retired the original trophies,

Frank also served as course designer for years and judged some years. 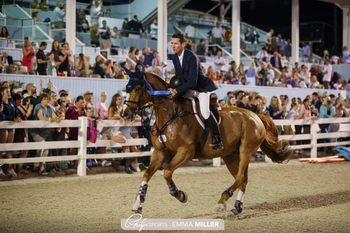 Ward on Faro had pulled up in the final class after having two rails down early, and, due to prior obligations, he had to leave before receiving his championship ribbons, which were accepted by Debney, who trains with him,

With his 12th win in the $250,000 Sapphire Grand Prix of Devon CSI4* and a win in the morning jumper class Thursday, Ward won the Leading Open Jumper Rider title with 35 points,, and Contagious, his mount in the Grand Prix, was Open Jumper Champion.

Ward received The Little Big Man Trophy, which had been presented by Laura Chapot after she had retired the previous trophy, for the Open Jumper Championship.

With two wins during the week on two different mounts, Jessica Mendoza of Great Britain was the Leading Open Jumper Lady Rider with 28 points.

“Play was super today," said Mendoza after the final class. "I made a little mistake to the last fence. I just turned a little bit tight, but otherwise I think he would’ve finished out in second place if I had that last rail. He jumped great, just got a little keen at the end. I thought it was a very technical course today. The jumps came up quick, lots of distances. There was a lot to do.”

“It’s my first time here," she said. "It’s nice that they do an award like this and it’s nice to be recognized for a great week. I’m very happy and thankful to my team!”

Layla Kurbanov on Ronja won the $20,000 Show Jumping Hall of Fame Amateur-Owner Classic, winning The Good Enough Challenge Trophy, which had been presented by Wendy Chapot after she retired the previous trophy a number of years ago.

“His name is Hyperbolics, but we call him Hyper," said Pielet. "He’s great, he’s 10 years-old and I got him two years ago. I’ve been jumping everything with him, I brought him up along the way and he’s great. He’s the best partner, so sweet and he’s like a dog on the ground. He can bully me sometimes because he knows I’m little, but he also respects me. When he does he is unbeatable.”

“My rounds were really good, I started off really strong and he was really consistent," she said. "The courses were nice for him. My trainer Andrew Bourns is in Canada, so Molly Ashe Cawley was helping me here, and Hyper really stepped up. It is so nice I was able to get here. I just started riding with Andrew last year during the North American Youth Championships].”

“I’m going to be a senior at SMU, so I commute back and forth, and I ride on the team there," said Pielet. "Whenever I can show my own horse I try to do that. I did three weeks of WEF, so I get lucky when I can come down. Andrew gets Hyper ready for when I get back so it’s really nice. I’ve been working on a lot of flatwork with Andrew, he can just take over a little bit because he’s a really strong, athletic guy. He knows it too, so we do a lot of diamond shapes, squares, and transitions to slow him down and make sure he’s responding.”