DEVON, Pa.--Martha Ingram on Quimby leads in the Amateur-Owner Hunter 18-35 division after two over fences classes and the under saddle class  while  Irene Neuwirth on Juan Carlos leads the Amateur-Owner Over 35 section. 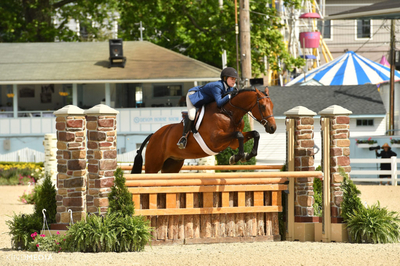 Martha Ingram on Quimby (Photo by KIND Media)Ingram on Quimby scored a 90 and a 91 in the first two over fences classes of the 18-35 section and also won the under saddle, placinher in high contention for the championship Saturday.

In the Over 35 section, it was Neuwirth on Juan Carlos  had a second and first place over fences and a fifth place under saddle towards Saturday’s championship presentation.

“IT'S BEEN really good, normally it takes me a few minutes to get to know a horse but it’s been pretty immediate for Quimby," said Ingram. "That’s more of a testament to Quimby as a horse than me as a rider, he’s really amazing. Obviously he was an amazing equitation horse and won a lot with Grace Debney, but his way of going is more of a hunter way of going. He’s a great mover, great jumper and he has a huge stride. He’s beautiful, so it’s all of those things that make him a good horse overall and a really good hunter. He’s very little but he’s mighty. He’s super sweet until you start jogging and then he becomes a bit of a stallion. He’s an absolute sweetheart and he loves to nap. He’s really relaxed, really great at home and super smart. We’re really lucky to have him.”

“It was funny because I haven’t shown in the Dixon Oval since 2014 when I was a junior, the year before my last junior year," said Ingram. "Luckily the jumps weren’t too big so I felt secure, and they rode beautifully. Quimby did the Hunter Derby yesterday (ridden by Kristy Herrera) and was fourth, so I knew he was going to be perfect in there. It was really just about going in and producing the rounds I know I can. Luckily I’ve been in pressure situations before. My mindset wasn’t really, ‘You have to win,’ it was just find one jump at a time and take it class by class, and it worked out! I think these are my first blue ribbons in the Dixon Oval. I couldn’t have asked to do it on a more special horse. Grace Debney got to see him earlier and Kate Conover who found him called me earlier, so everyone really loves him. He’s a special horse. It’s always great to win but it was special with him.”

“It’s so great to be back here, this is my favorite horse show," she said. "I’m super excited and looking forward to tomorrow and at least keeping the same momentum.