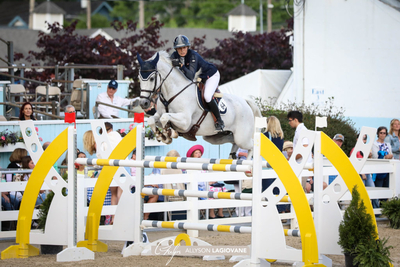 Jessica Mendoza on Dublin (Photo by Allyson Lagiovane)McLain Ward, with his win Thursday morning on Faro and his bonus points for winning the Grand Prix on Contagious, leads with 35 points.

A field of 21 competed in the single-round, faults converted speed competition in which 4 seconds for every rail down is added to the rider's final time.

The first to go clean was 16-year-old Zayna Rizvi on Chaplin W, finishing 69.62 seconds, followed two rounds later by Mavis Spencer on Con Calle, who finished in 69.53 seconds to temporarily take over the lead.

A few rounds later, Mendoza on her second mount of the class, Dublin, went into the lead after shaving two-tenths of a second off of Spencer’s time, finishing in 69.33 seconds for the win.

MENDOZA also won the $50,000 Jet Run Devon Welcome Stake CSI4* on Play as well as placing third and fourth in two other jumper classes in her first time at the Devon Horse Show.

"Dublin has been amazing since I’ve had him," said Mendoza. "He’s just a real winner at that height, he loves it. He has the speed. I always put him in the 1.45m speed classes and that’s kind of his jam.”

“I rode Casanova first, and I had two rails down, so I didn’t go into the lead," said Mendoza. "I knew I had to be quick with Dublin. Unfortunately I didn’t actually get to see anyone go because I was swapping horses. I just knew I needed to go as fast as I could and I knew Dublin would keep the jumps up. He didn’t do so many leave-out strides, he’s just quick across the ground and across the jumps. Naturally on the turns he’s quick.

“It’s been an amazing week," she said. "It’s my first time here, and I don’t think I’ve ever had as good of a show that I’ve had here. Whatever I do tomorrow, it’s been amazing, but a ribbon would be amazing. I will do one horse in the $74,000 Idle Dice Open Stake CSI4* tomorrow.”

After two classes, the Amateur Owner Jumper section is a very close competition for the championship with one class remaining.

With bonus  points to be awarded in Saturday afternoon's stake, it's a wide open race.