Hunt Tosh on Autograph wins the $25,000 Hunter Derby at Devon 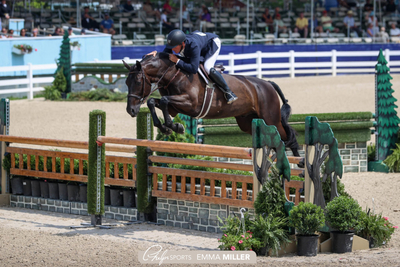 Hunt Tosh on Autograph (Photo by Emma Miller)A field of 33 competed in the two round Derby on Thursday, June 2 at the Devon Horse Show and Country Fair.

First in the order, Greg Crolick of Clarkston, Mich., on Chappy scored 181 with all four high options taken, and Tosh on Autograph received the highest score of 185, also taking each of the four high options on course.

Kristy Herrera on Quimby and Kelly Farmer on Meaningful, both scored 180 with all high options.

The second, handy round demanded adjustability, technical accuracy and ease in way of going around the winding track with the opportunity to earn up to 10 handy bonus points.

Colin Syquia on Front Page held the lead in the early part of the handy phase, having earned a score of 202 for a total score of 380.3, which eventually placed him third.

Crolick on Chappy scored 202 to finish with a total of 383 to take over the lead, until Tosh on Autograph received a handy round score of 198.5 after taking all four high options to finish on a total score of 383.5, surpassing Crolick by just one half a point.

Crolick on Chappy was the reserve champion ribbon, while Syquia on Front Page was third place.

“OBVIOUSLY Devon is my favorite, it’s so special," said Tosh of Alpharetta, Ga. "To come back this year and be able to win the derby is fantastic. My standby, Cannon Creek, I made a mistake on him. I misjudged in the double combination so he was out of the handy. Autograph we’ve had for a couple of years. He hasn’t done many derbies but he went beautifully in the first round. Greg horse jumped beautifully. I got a little nervous because I touched the second jump and had a little rub there. I thought, ‘Ok, I’ve got to do everything I can.’ I tried to make it up, go a little quick back to the last jump and gallop the last jump. It was a beautiful class, the horses jumped beautifully. Greg’s horse was amazing. I always want to win on Cannon Creek, but the win on Autograph was fun. It was a nice class.”

“We’ve had Autograph for a couple of years," said Tosh. "Covid kind of changed plans with him early on. He was great as a second-year horse through indoors last year. He was actually Green Hunter of the Year last year. Obviously the Wheelers, they are amazing to me and such great owners and supporters. This is Ceil Wheeler’s horse, it’s owned by her, and we were down at the gate joking that we aren’t quite sure who ends up owning who sometimes. Kenny and Ceil Wheeler were joking about it, but Ceil’s loved him from the beginning so my wife put him in her name. This is actually Ceil’s horse, so I give her credit for owning him. He’s been fabulous. He was great through indoors and came here and in the first class in the High Performance he was second place behind Cannon Creek and had a great week here showing. Cannon Creek was champion so it was fun to have Autograph win this so he had a highlight at Devon. He was another Redfield Farm horse, Emil Spadone picked him out. We’ve had him for about three years now. Emil brought him over and we bought him from him. He was great and we did him in the first-year green right away. That was Covid time, and last year he had a normal show career as a second-year horse and made it to indoors. I couldn’t ask anything more from today.

“It’s always nice to have more than one horse obviously," said Tosh. "Like I said, I made a mistake on the one horse so to have a backup makes my life easier. We’ve been excited. He’s a little bit of a quirky horse, he’s been great all along but he has some quirks to him and the Wheelers are so patient and supportive of me. They allow me to go at my own pace with some of them and allow them to grow up. We were talking last night about how far this horse has come, and in this environment we weren’t sure how he would handle it. So it’s nice that we took our time and let him go at his pace. I thought in the end he would be a great derby horse, high performance and building into the 4’, so being able to get here and make it look like I knew what I was talking about is perfect. He gets credit for that.”

“It meant a lot, this is the first Devon without their father Mr. Wheeler," saidTosh of winning the class sponsored by the Wheeler Family. "I can’t say enough good things about them. They are so supportive, this was their father’s favorite horse show so to be able to come here and win, it is always fun. You couldn’t ask for better people to work for.”

“I couldn’t ask for Chappy to be any better," said Crolick. "It was wonderful competition here and the horse jumped great. I just tried to be as handy as I possibly could, turning where I could and hopefully meet the jumps correctly.”

“This is my best finish here," said Crolick. "I was third here three or four years ago, so this is the best finish here. To me it’s so exciting to be here, Devon is such a special place. It’s such a special place to come horse show, we love coming here. There’s a great energy in the air when you walk in that ring. They hear the buzz, the people in the crowd cheering, it’s nice to have. It was wonderful to come here, put in a good trip and have great competition to show against.”