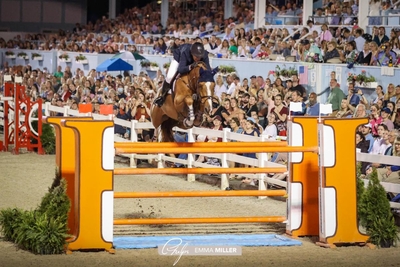 McLain Ward on Contagious (Photo by Emma Miller for Phelps Sports)Ward certainly appeared to have every advantage going into the Grand Prix, as he was not only riding a horse that already had a star studded list of accomplishments, but he had also drawn last to go in the 20 horse field, an advantage if he went clean to make it to the jump-off.

But Contagious had slipped and fallen on a turn in a jump-off in Tuesday's evening class, and despite the fact that Ward had said the horse was fine in an interview Wednesday morning, a slight worry remained that maybe some slight effect remained.

Not only was there the worry for his being able to e at his best for the Devon Grand Prix, but he is also Ward's main hope for a place on this summer's World Championships.

But Contagious jumped spectacularly in the first round, clearing everything with room to spare.

COURSE DESIGNER Olaf Petersen, Jr., of Germany set another excellent course, one that caught out horses throughout the track yet also had one set of fences quickly termed "heartbreak alley." 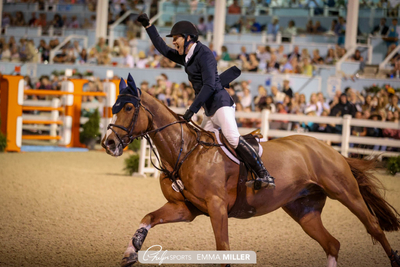 McLain Ward on Contagious after his winning jump-off ride (Photo by Emma Miller)All but four of the 16 fences on the course caused one or more faults, and the final combination, set on the uphill slant of the Dixon Oval and tight against the railing lined seven or eight deep with spectators, 12 a, b and c, came down a total of 10 times between the three fences.

Thunder storms, some severe, had rolled through Chester County early in the evening, but, luckily for Devon, by the 8:30 starting time of the Grand Prix, everything had cleared out and taken with it most of the stifling heat that had soaked exhibitors with its humidity throughout the beginning of the week.

Seven qualified for the jump-off, and Ward sat in the catbird seat as only one of the seven, Schuyler Riley on Robin de Ponthual, had gone clean before him, finishing in a quick but not super fast 33.57.

Ward set off quickly, and throughout the course his time was quicker than Riley's, and he finished in 32.30 for his 12 win in the Grand Prix.

Robin De Ponthual, the oldest horse in the jump-off at 17 years old, was second, and Mimi Gochman, the youngest rider in the class at 17, riding Celina BH,, was third, the fastest with 4 faults, finishing in 33.12.

The future looks good for the U.S., as a pair of 17 year olds, Gochman, who was also Devon Junior Jumper Champion on Gigi'sGirl BH, and Zayna Rizvi, who won on Junior Weekend, also placed well in throughout the Open Jumper division against older, professional riders.

U.S.team chef d'equipe Robert Ridland, who from the beginning of his tenure used young, up-and-coming riders mixed with veteran riders on his Nations Cup teams, now has another pair to introduce to international competition.

Following the awards presentation and the victory gallop, Ward concluded with what has become his signature finish. 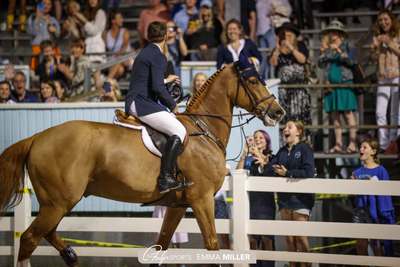 McLain Ward throws his ribbon to youngsters grinning with delight (Photo by Emma Miller)Taking off the blue ribbon from Contentious' bridle, Ward threw it to a little group of youngsters standing by the railing, an act of generosity that means so much to Devon's jumper fans, as can be seen on the faces of the youngsters.

“It’s kind of an amazing journey," said Ward. "I always grew up watching my father here, and this is such an important event for all of us. This ring for me has really become my home. I get great energy from the crowd, I love it, and no matter how many places I go in the world and great experiences I get to have, I love coming back here. I love this crowd, I’m always up for the class and it just always seems to go my way."

“I feel at home here and this is a very comfortable place. I know the ring very well and the little idiosyncrasies of the arena," he said. "I know where the crowd is and where the horses might be distracted, which is always a factor. I always come here with my top horses! I enjoy it a lot here. When I have a bad day here or something goes wrong, it feels like family and they are understanding. You focus on the competition and try to do all the planning and preparation. I feel nerves, which I have always dealt with, but that comes from desire. No matter where I go in the world or what I am lucky enough to be a part of, I always enjoy coming back here. I think the atmosphere is one of the best in the world. The buzz is the same as a 70,000 person crowd, and they are knowledgeable, which is very unique here in the United States. I haven’t been anywhere where I think there is a better atmosphere than here.”

“The horse was great (in the first class on Tuesday) and he has been all year, but in the jump-off he slipped," said Ward. "It happens – it is part of the sport and is a factor. He hit the ground pretty hard but luckily he was ok. He came out unscathed. I was a little sore but when your adrenaline gets going it sort of takes over. I don’t think the horse was any worse the wear from it.” 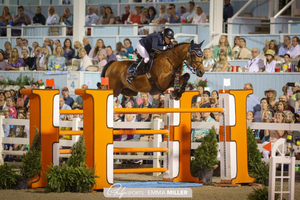 Schyler Riley on Robin Du Ponthual (Photo by Emma Miller)“I thought the first round was kind of a friendly course to be honest," he said. "Never free but a little bit on the friendly side. I thought the jump-off was quite big, funny enough. It was a bit awkward with the turn to fence three and then a vertical in a funny place. One side of the ring is always notoriously difficult, which you saw in the first round, but I thought the jump-off was quite challenging. Schuyler had a great round and I’m proud to say I sold Robin De Ponthual originally, so it was a win either way! I know she has a big stride, and I don’t have that kind of stride, so my horse had to be quicker with his feet. I really tried to utilize that advantage.”

“I have to say, I originally had not thought of Contagious as an Olympic horse, which I have said before,"said Ward. "We were hopeful, but we thought he would be a really good Grand Prix horse, but he has the heart of a lion in a horse. He just fights and fights and fights. His rider is a bit of a fighter too, so it’s a good combination. He has given us so much and his partners made that happen. They believed and trusted me and the horse has rewarded us.”

“I think I only showed here once as a junior, but there is so much history here, and it has always been on everyone’s radar as a special place to be with energy that is unreal," said Riley. "I came back here as an amateur and then as a professional, and I’ve always had good energy here. The last time I was here with Robin, he jumped clear. He loves the energy here as well so I had a positive feeling going into tonight.” 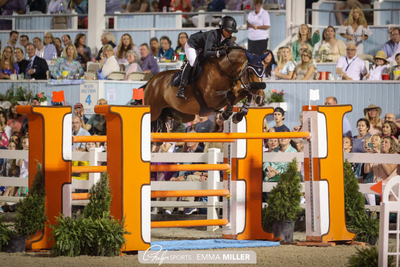 Mimi Gochman on Celina BH (Photo by Emma Miller)“For me, my horse is a slower mover than most," said Riley. "He has a big step but he has a slow way of going, so time-allowed is always the biggest concern. I thought the track was built to CSI4* level, but was jumpable. Like McLain said, the jump-off was tricky to jump clear, and my horse is brave and careful. I went as fast as I thought I possibly could on Robin and we discussed a glimmer of six strides down the last line, but it was only if I caught the first distance to the vertical. As I turned to the vertical I saw it and went for it! For Robin, that is as fast as he is going to go and I am so proud because he jumped his heart out tonight. He has been a really special horse for me in my career and I am honored to be second.”

“I was really going for a clear, but I have been working a little bit on moving up with Celina BH and trying to find the spacing at the higher heights, and I think that is something that comes with learning and trying to go that fast but also giving room at the jumps," said Gochman. "She jumped her heart out and she tried her best, and it’s always a learning lesson, but I am honored to be in the top three and I’m really excited.”

“It is a little intimidating, but I try to focus on Celina and our partnership and the courses," said Gochman of being a junior competing against professionals. "I listen to all of the advice I’ve been given and watch the fantastic riders as much as I can to learn and do my best.”