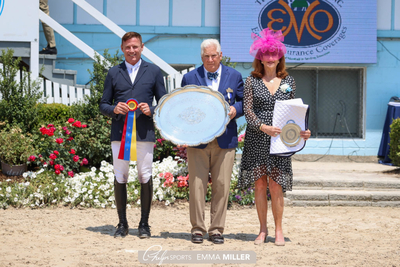 Scott Stewart, Devon Leading Hunter Rider (Photo by Emma Miller for Phelps Sports)Stewart of Flemington, N.J., had previously received the award 16 times over the years, including each year of the Devon Horse Show since 2015, with no signs of letting up in his domination.

Riders accumulate points in one or more of the professional hunter sections, but if the rider rides more than one horse in a class, only the points of the top placed horse counts.

“I have a discussion about cutting back all the time with Ken Berkley," said Stewart, referring to his partner. "It’s hard to cut back. For me I have a lot of young horses, two and three-year-olds, and if you cut back then you don’t really pipeline them coming along. So far I’m sound and everything."

"I don’t actually show all that much," said Stewart. "In Florida I show eight or nine times, maybe 10, but I don’t show that many. I’ll go to Upperville next week, then I will come back here for Brandywine for some of the young ones, then I won’t show again until Bluegrass in August, so my summer is light. My horses that I show myself, ideally they do 12 or 13 shows per year. It’s pretty much the same schedule every year, it doesn’t vary too much.”

THE LEADING Lady Rider Award was given to Amanda Steege of Califon, N.J., with her points accumulated on Lafitte de Muze in the Regular Working Hunter Section.

“He definitely has lived up to our expectations," said Brooks. "Beyond this, I think there are still great things to come, much bigger. He’s very, very brave, we’ve never thought about the derbies. He does enough divisions every week. I watched him jump two jumps on the video and said, ‘Buy him.’ The first thing was his presence, then his balance, his proportions, how he landed, he cantered away from the first jump. It was a line I saw first and you always go with your first instinct. I watched more and he actually was better."

Ashleigh Glorioso of Burke, Va., on Epilogue won the Side Saddle Championship with 26 points. 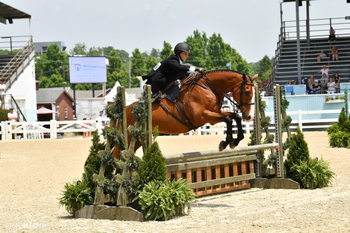 Ashleigh Glorioso on Epilogue (Photo by KIND Media)This style of riding was first introduced in Great Britain by Anne of Bohemia in 1382, at the time of her marriage to King Richard II.

It introduced a more independent way of travel, since travel was primarily through cart or carriage back then.

Alexis C Dipasqua on Reba Dean was the reserve champion with a total of 20 points.

"Epilogue is a 23-year-old thoroughbred," said Glorioso. "He used race and and then steeplechased, so this is his third career. We’ve had him for a while, almost 10 years. He really likes the side saddle. He just goes a little better side saddle. When you ride him he can be particular but he was good today.”