DEVON, Pa.--Scott Stewart on Ever After won the first hunter championship at the Devon Horse Show and Country Fair on Tuesday, May 31, accumulating a total of 22 points over the two days of competition. 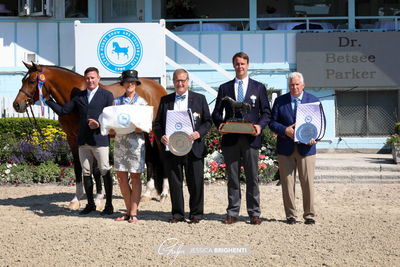 Scott Stewart and Ever After (Photo by Jessica Brigheni for Phelps Sports)On Monday, Stewart on Ever After scored 92 and 90 to take home first and second place in the first two over fences classes and then placed second in the under saddle that afternoon to accumulate 22 points.

Reserve championship went to Hunt Tosh on Corragio with 20 points, with two scores of 91 to place first and second in Monday’s over fences classes, as well as score of 88 in Tuesday’s stake for a third place finish.

In the Green Confirmation Hunter, Nick Haness on Only Always was champion with a total of 45 points.

Only Always has been champion at every show he entered since arriving in the states.

On Monday, Only Always scored 88 and 87 to place first and second and on Tuesday won two classes on scores of 88 and 89 and ultimately the championship.

The reserve championship went to Holly Orlando on Adler with 26 points.

THE GREEN divisions finished with Stewart taking his second championship, this time in the Green 3’9” Hunter division on Nottingham with 34 points over the two days from two blues Monday with scores of 92 and 93, and first and third Tuesday morning on scores of 88 and 91 respectively.

Jimmy Torano on Laskano was reserve champion with 27 points.

"Ever After is awesome," said Stewart. "This might only be his fifth or sixth horse show, so he hasn’t really done a whole lot, and he hasn’t really shown since Week 10 at the Winter Equestrian Festival. I was really happy with him yesterday, he was great. Today he got a little green in the handy and got a little spooky but for the most part he’s always really straightforward and nice. I’m really thrilled. He’s 12 years old and he was a grand prix horse. He is by Nick Skelton’s horse Arko. His job is going to be a large junior horse for Ella Bikoff, his owner. The courses rode great. I love the handy round, maybe not for him but it was beautiful. It was great to ride out there, the courses were nice.”

“What an exceptional animal this horse Only Always is, and what makes it more exceptional is the team behind him," said Haness. "I’ve been very fortunate that Carleton Brooks selected me to be this horse’s rider. We came together at the end of last year and we had our sights on being champion at Devon, so this moment really gives me goosebumps. It’s exciting.”

Of his partnership with Carelton Brooks, Haness said, “We’re both professionals from California with our own businesses, and it’s really a treat to come together and so special on a horse like this because horses like this don’t come around that often, he’s a very special horse. He’s a beautiful jumper and it’s been a beautiful journey to be able to work together and collaborate – me as his rider and Carelton behind the scenes, training him at home and bringing him to the ring and presenting him the way he does. He’s turned out beautiful and it’s a testament to Balmoral and their care and Tracey and Carelton do an exceptional job with that so for me, it’s a blessing and privilege to be able to get on a horse and just do what I love to do and go in the ring and shine, especially today and throughout this whole week. It’s been a really fun process, the horse has been consistent throughout the weekend in every class and we couldn’t be more thrilled for today’s outcome.”

“I think more than anything, this is a long way for us to come, and I think it’s really important the West Coast comes and shows what we’ve got, which is a really strong build up of great horses, especially Only Always,: said Haness.     'To come all this way, it’s certainly a trek, for me I left my business in California, I’ve got 28 horses showing in California back at home. I’ll be on the red eye back to the show tomorrow. The Devon Horse Show is an iconic horse show that most people dream about being here to compete and be champion here. We didn’t show this horse much last year, he sort of bloomed this year and came out in the winter really strong and blew people away from the beginning. He’s been champion almost every time he’s ever shown so we really wanted to bring him to Devon. Today, this moment, is something we’ve really been working towards together for the whole time with this horse. It paid off to come all this way from California and to have a great week. I’m proud of the horse and I’m proud of the team.”