DEVON, Pa.--Scott Stewart of Flemington, N.J., a multiple time leading hunter rider at the Devon Horse Show and Country Fair, started his mission to win that title again by sweeping the first two classes of the Green 3'9" Hunter section. 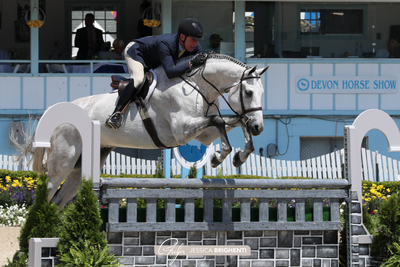 Scott Stewart on Nottingham (Photo by Jessica Brighenti for Phelps Sports)Monday was the start of Senior Week with professional hunter riders competing in the Green Hunter divisions.

Stewart won over 16 entries in the first two classes of the Green 3’9” Hunters.

In the first over fences class, Stewart on Dr. Betsee Parker’s Nottingham had the class high score of 92.

In the second class, Stewart on Nottingham had a new division high score of 93, while a score of 91 gave Torano on Laskano second, and Geoffrey Hesslink on Mon Tresor was third place after scoring 90.

Although it was Nottingham’s first appearance in the Dixon Oval at the Devon Horse Show, the 10 year-old Oldenburg gelding is no stranger to the winner’s circle.

HE HAS WON champion and reserve champion titles at prestigious horse shows across the United States, including the Winter Equestrian Festival, The Hampton Classic and the Upperville Colt & Horse Show.

As a 9 year-old, Nottingham won his first derby, the 2021 $10,000 USHJA International Hunter Derby at the Kentucky Spring Horse Show.

“Nottingham felt amazing today," said Stewart. "We got him at the end of the Winter Equestrian Festival last year. He was successful in the first years last year, he’s been champion or reserve almost every time he’s shown.”

“He felt great, especially in my second round," said Stewart. "He was totally relaxed. I could really gallop around to the single oxer and everything. He felt really comfortable and I thought he jumped great.”

“Tomorrow we will just try to keep it the same, then he goes on to Upperville, then he gets most of the summer off,” said Stewart. “I love Devon! The Dixon Oval is my favorite ring to show in.”