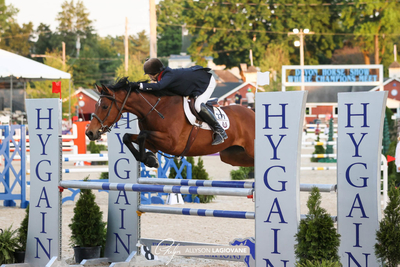 Wendy Chapot Nunn on Cache (Photo by Allyson Lagiovane for Phelps Sports)Chapot Nunn of Neshanic Station, N.J., also placed second in the Classic, but on a different horse, General Thompson.

Brooke Treichler on her own Cheeky Monkey 2, won the Classic with the fastest time in the 10 horse jump-off, finishing in 38.998 seconds, and with the bonus points awarded in the Classic, Treichler also won the Reserve Championship with 15 points behind Nunn with 20 points.

In the first class of the division, the $2,500 Adult Amateur Jumper Sunday afternoon, Chapot Nunn and Cashe’, a 12-year-old Holsteiner mare owned by Laura Chapot, won in a jump-off time of 36.399 seconds, with Tori Bilas on Brisbane second and Alyson Gurney on Black Friday third. 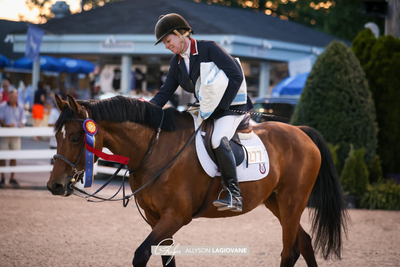 Treichler on Cheeky Monkey 2 was first to go  in the jump-off and had the fastest time of 38.998 seconds.

Chapot Nunn on General Thompson finished in 40.146 seconds for second and Hope Batchelor on Byolga was third.

Another Chapot homebred, Zealous, previously shown by Laura Chapot and now ridden by Catherine Sher, trained by Laura, finished sixth with one rail down in the jump-off in a time of 36.508.

"Cache’ is funny – she can be the sweetest little mare," said Chapot Nunn. "But when you get on, she's going, ‘I got it, lets go!’ She’s fun because she wants to go and it’s easy to get her to go. She just loves it. We bred her and my sister Laura showed her for a little bit, and then when it came time to retire one of my horses Laura said ‘Why don’t you give her a shot, she may be too small for you,’ and we kept trying other ones, but then we gave her a shot and it’s just been a great partnership!”

“My plan was to get going and get her in the game, and when she’s in the game she’s good," she said. "The courses were great. Olaf always does a wonderful job, but it’s more just get to that first fence, and we did the leave stride out down that first line, even this morning, and when Cashe’ is in it, she has a huge stride and she can do whatever you want to do.”

“I am a managing director at KPMG in the department of professional practice so I have a full-time job and three kids," said Chapot Nunn "My son Frank, named after my father, is 13 years old tomorrow, then I have twin girls, Mary and Kathleen, who will be 11 years old in June. So between them and work, if I’m lucky I get to ride once a week, and that’s about it. I’m hugely privileged to have over-qualified horses and Laura is able to keep them fit. I know what I’m doing and they know what they’re doing so we don’t have to practice a ton.”

“About the time after college when I was deciding what I wanted to do, Greg Best was still around at the barn, and I knew Laura wanted to do it professionally, so I thought there was no way the barn would support three professional riders," she said. "I knew I could always come back and stay in the amateurs, so I thought, ‘Let me just go do the job and pay the mortgage,’ and it has worked out for me. I think it’s worked out for the farm as well.”