DEVON,Pa.--Wendy Chapot Nunn on Cashe' won the $3,500 Adult Amateur Jumper Sunday afternoon at the Devon Horse Show and Country Fair, while Olivia Sweetnam swept the Children's Jumper section to win the championship on Just Noble and John White was Pleasure Drive Champion for the fourth time. 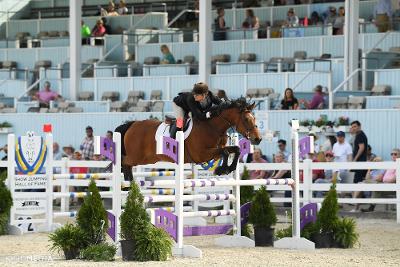 Wendy Chapot on Cashe (Photo by KIND Media)"We bred Cashe'," said Chapot Nunn. "She's out of Samantha, a mare Laura showed, and she's by Quite Easy.She's 12, and I've ridden her for four years. She's super fast across the ground, and she's super fast at turns."

"She's nice to be around on the ground, my kids can hold her at shows," said Chapot Nunn, who has a 13-year-old son and 11-year-old twin girls. "But she gets very excited when you get on her, and she starts chomping on her bit. She hates horses coming at her in the schooling ares. She'll spin and leave. So we put a huge red ribbon on her bridle so no one comes at her."

Chapot Nunn has limited time riding as she is managing director of professional practices at KPME.

"I ride once a week," said Chapot Nunn. "I start showing in May and show until September.

Despite her limited riding time, Chapot Nunn is still very successful, among her victories last year being team and individual gold medalist at the Zone 1 & 2 finals.

She comes by her talent naturally, as both father Frank and mother Mary were Olympic team members, and she is a veteran at Devon, having won junior jumper championships at Devon in past years.

SWEETNAM won all three Children's Jumpers classes, winning her first on Saturday, then winning Sunday morning, finishing the jump-off in 26.841 and winning the final class with a jump-off time of 33.510. 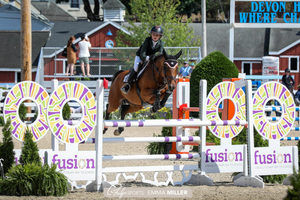 Olivia Sweetnam on Just Noble (Photo by Emma Miller for Phelps Sports)Sweetnam also comes by her talent naturally, as she is the daughter of Irish Olympian Shane Sweetnam, who now lives and compeeson this country but maintains his Irish passport.

"I got Just Noble about one year ago," said Sweetnam. "We imported her from Europe. She is an 8-year-old mare, her name is Noble in the barn. She’s so sweet, I love her so much! In the beginning my mom didn’t have much hope in her, but my dad saw something that nobody else really did, and I really loved her. One month after we got her, she started winning. She won my first children jumper class and we just have a really good bond. She’s just such a sweet horse in both the ring and the stalls.”

“Honestly it feels kinda craz," she said of winning all three classes. "I don’t know, I can’t really believe it happened to be honest. I’m so happy with Noble and how she jumped all week. She was so amazing.”

“I love Devon," she said. "This is my fourth time coming to the show. I really love it here. The whole environment makes it feel so special with the crowd and everything. It really makes it a special horse show and that’s not something you see all the time, especially for these jumpers.”

“I’m done riding Noble," said Sweetnam "I’m moving up to the bigger jumpers which I already have with a different horse, but you can’t cross enter so this is my last hoorah. My barn-mate Lindsay Tomeu will lease her for a bit, and then eventually when my little brother is ready, he will take her.” 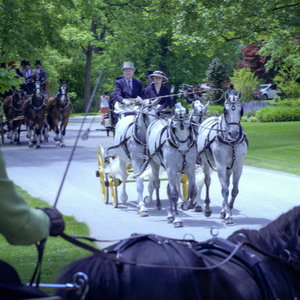 John White Pleasure Driving Champion (Photo by James Wilson)“It’s always gratifying for all the hard work. Everybody and the whole team put a lot of work into it and the horses deserve it, they are great horses and they deserve it," said While.

The Carriage Pleasure Drive begins at St. David's Church, and then the carriages drive through the countryside to Devo, where te final judging is done.

“The two horses in the front are Lippizan and they’re from Hungary, and the other two are Kladruber horses and they’re from the Czech Republic," said White.. "These are not related, I have some that are, but these aren’t. They’re the same breed, but they are not related. They’re both pretty rare breeds, but the Kladruber is very rare, there’s about 300 of them in total in the world and almost all of them are in the Czech Republic. They are all geldings. The two leaders are 11 years old and the others are 17 years old and 16 years old. I chose them because they were bred to pull carriages and the other two don’t have to do too much, so they just have to look pretty.”

"This is called a Dog Cart, it’s actually called a Heavy Dog Cart because it’s more heavy weight, and a lot of Dog Carts are lighter," said White. "It was built in Belgium in about 1890 and it was in a collection in Belgium, which was from a man who was a big collector. He sold a lot of carriages to an American who lived in Virginia, and that person had them for a while and then they were sold and I bought this one. I’ve had it for 12 or 13 years.”