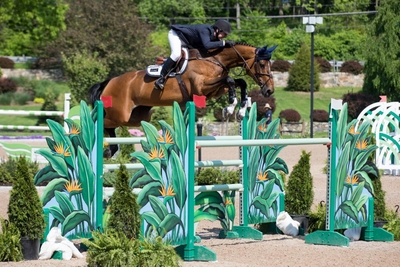 McLain Ward on HH Azur (Photo by Randolph PR)Only four of the 31 entries representing nine countries made it to the jump-off, where Ward and “Annie” had the fastest jump-off time of 37.290 seconds.

Devin Ryan on Eddie Blue took the early lead with what seemed to be the only clear score in the initial phase, but Ireland’s Paul O’Shea and fellow Americans Katie Dinan and McLain Ward quickly addedclear rounds as the class went on.

“I think Alan Wade did a really good job over the two weeks of competition here with the new surface,” said Ward, who is also the Spring Horse Shows Co-Chair. “It was really phenomenal and got better and better as the show went on. I think we saw that in the results this week with more clear rounds, even though the level was higher. Today, he built a very challenging 4 Star. We had a pretty strong group of horses with several Olympic and World Championship horses, but the courses had been built up to that challenge in a good way. The horses were all prepared to jump.”

“Whenever I get on her now, I give her a pat and say, ‘You don’t owe me a single jump, but if you could jump a few more, I’d appreciate it,’” Ward said of his longtime mount. “I’m always thankful to the very supportive Harrison family and Double H Farm for being in my corner my entire career and this horse’s career. It’s great to see this mare wonderful, healthy, and still doing this sport. It’s lucky that she doesn’t actually need to jump a lot to compete and be in top form, so we kind of pick and choose. She’s two for three so far this year.”