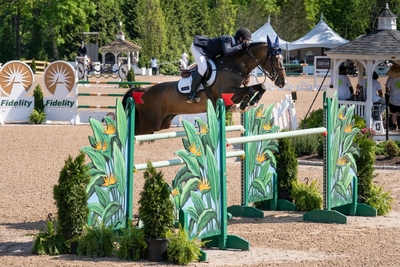 McLain Ward on Faro (Photo by Randolph PR)Ward stopped the clock at 35.790 seconds to beat 37 competitors from 10 countries, 12 of which made the jump-off.

Six were clean in the jump-off, with Brazilian Rodrigo Pessoa on Chili placing second in a time of 36.500 seconds.

“It’s been a good week for both of us,” Ward said of his friend and rival Pessoa. “We’re both local here. I’m a lifelong resident of this area, and I’m very proud of the changes taking place here at the Old Salem Farm. Rodrigo and his wife are new residents of the area and are also very excited. I think it’s very motivating to see what’s happening here and have the sport living up to that as well. For me, this is one of the most beautiful parts of the world. It has a major horse area, a great community, and we’re very close to New York City. I think we can build off our new arena and create some of the best sport in the world.

“I WAS lucky to go after Rodrigo,” Ward said. “Chili is a new mount for him, so even though it’s a careful horse, I knew he wasn’t going to take all the risks. My horse is also a bit of a new mount for me but has a little more experience than his. I thought if I could be quicker from beginning to end without taking huge risks, I might nip him, and it was certainly good enough.”

“I think we’re going to have a great Grand Prix here,” said Ward, who is also the Spring Horse Shows Co-Chair. “We have a great forecast, and as always here at Old Salem, we have a great audience to cheer us on. I have my old partner HH Azur, who I think still has some big wins left in the tank even though she’s more in the sunset of her career. I always tell her when I get on, ‘You don’t owe me a single jump, but if you could give me a few more, that would be nice.’ We like to have high-end sport here, and this new arena with these first weeks of shows really is the launching point. We have great plans for the future.”