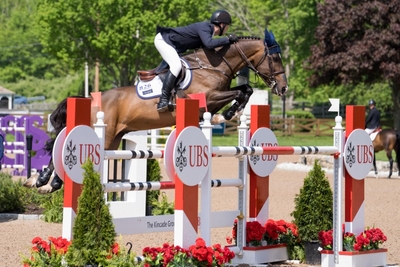 The Old Salem Farm Spring Horse Shows are one of the premier stops on the nation’s hunter-jumper horse show circuit, offering a full schedule of world-class competition May 10-15 and May 17-22 that features the nation’s best in equestrian sport.

Ireland’s Alan Wade set a winding 16-effort, 1.50m course for the 39 entries representing eight countries in the $65,000 Welcome Stake, 14 of which qualified for the jump-off.

“It’s been a great day,” Ward said. “Faro is a bit of a new horse for Susie Heller, his owner, and myself. We actually sold him about a year and a half ago, but he wasn’t a great match for his rider, so we bought him back. I’m really excited about competing him. He’s a very careful, very competitive horse, and he can do some really great things. In the first round, my strategy was to not make any mistakes. He jumped great last week and was third in the Grand Prix Qualifier, so I knew he was comfortable in the ring. This class had a big jump-off with quite a few clear initially, and I planned to go as fast as I thought I could to put a little pressure on everyone else.”

SIX TIME Brazilian Olympic veteran Rodrigo Pessoa finished second with his time of 41.260 seconds on Quality FZ, and Captain Brian Cournane of Ireland on Armik was third in 42.690 seconds.

Ward, who is also the Spring Horse Shows Co-Chair, started his day with a victory in the $25,000 National 1.40-1.45m Jumper Classic on his speed specialist Catoki, tripping the timers in 37.231 seconds.

“This is exactly what his job is,” Ward said of Catoki. “He’s a speed horse, one that I take internationally for these types of competitions as well. He’s got his own way and a unique character that’s a little bit special. I think he’s won a competition at every show this year. He’s a pretty incredible little horse.

Recognizing their efforts as the backbone of the equestrian industry, professional grooms were judged on their horse show attire and horse’s overall turnout in the hunter and jumper divisions.

Both winners received a $1,000 share of the purse, blue ribbon, and professional grooming backpack presented by McLain Ward, Inc.