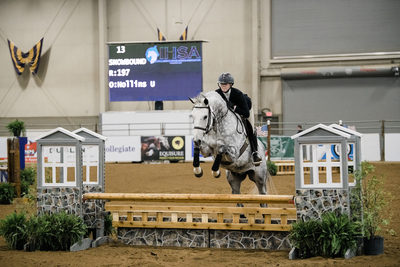 Julianna Empie of Penn State, Cacchione ChampionEmpie is the first Penn State Equestrian team member to be crowned the USEF/Cacchione Cup Champion in 44 years when Luanne Richards rode to the championship in 1978.

She was a one-half point behind the top score of 88 from Lilly French of Cleveland, Ohio, from Miami University of Ohio.

Empie impressed the judges in the flat phase aboard Maverick and scored a 93 to move her into the top slot going into the work-off round.

The test, like the over-fences phase, included options for riders to best showcase their skills but required some thought about their mounts.

AFTER A tight turn off the rail to a trot fence at the far end of the arena, riders could choose to go directly to fence three – the IHSA/Alumni wall jump – or take a longer track around to jump it going away from the judges.

The test also included some flat work and asked the riders for three changes of lead along the judges’ line and a counter canter to fence seven, a single natural-rail oxer coming towards the ingate.

As places were called out in reverse order, the last two standing were Empie and Arielle LoGuidice of Morganville, N. J., from Centenary University, and Empie came out on top.

“My stomach was a little tight with excitement and anxiety," said Gretok. "We were really proud of the two of them because Arielle beat Julianna at Zones. He had mentioned to me that he felt these two were going to lead the Cacchione Cup at Nationals.”

“I had some questions about how I wanted to go from two to three in the test,” Empie said. “I figured that the handier option would be to go right from the trot jump to the IHSA jump, which is what Arielle did. But I watched the horse that I drew, Snowbound, throughout the week and he tended to land left and is a little more of a hunter type. I just didn't think I'd be as smooth with that direct option, so I chose to go around and rollback to the IHSA the other way.

Gretok thought the test asked a lot of good questions.

“We adjusted our plan,” Gretok said. “I think we did the right thing for the horse, which is what I actually believe the judges wanted all week. Ride the horse not the class.”

As a junior, she has one more year of school at Penn State and one more year to qualify for the IHSA National Championship Horse Show and the USEF/Cacchione Cup.

Grotek had nothing but praise for Empie. “It's a privilege to get to teach her and help her become the horseman she's going to be. It's refreshing to meet somebody that really cares about the horses and truly tries to give them the best ride they can have.”

Empie also was champion in the Collegiate Cup Open Equitation on the Flat after a no-stirrup work-off of the top four.

EMORY AND HENRY College in Emory, Va., earned the Collegiate Cup, defending their title from the 2019 IHSA National Championship Horse Show, before COVID-19 forced the cancellation of two postseasons.

“During the down time we learned how to ride,” Richardson said with a laugh. “We didn't show very much, if at all, we didn't do any collegiate stuff. We just really focused on correct technique, correct, riding, correct human stuff for the highest-level horsemanship. It's an all-inclusive program. It's not all just about the competition. It's about the technique. It's about the horse care. It's about doing well in your classes, like farrier science, nutrition–all the topics, so they're well-rounded horse people. It makes a difference in the saddle.”

Richardson explained that there are only eight riders representing Emory and Henry in competition and 12 supporting team members at IHSA Nationals but there are around 67 on the team that make it happen.

“It is a big program,” she said. “Everybody makes a contribution to what we're doing When we're hosting horse shows, everybody works, from the open riders all the way through the walk-trot. Every member plays a part. We have many horses too, to care for – and we’re always looking for more. We have lovely school horses donated from friends, family, friends and alumni.”

Richardson said that her aim in coaching is to get the best quality ride possible on the horse her students are riding at the time.

She teaches her riders to be as normal and natural, as possible to elicit excellence from the horse.

At a competition they watch the horses school, and they discuss the different types of horses to try to be sensitive to their idiosyncrasies.