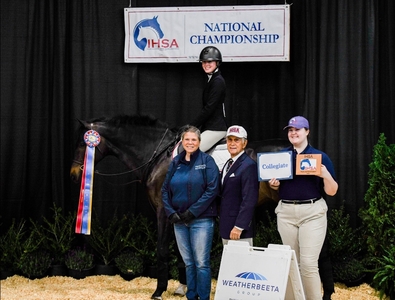 The 17-rider division rode over a flowing course of eight jumps with options at fences two and three.

As the first rider on course, Airelle Logiudice of Morganville, N.J., from Centenary University set the pace and score to beat of an 85, and the rest of the field took notice.

Julianna Empie, a junior on the Penn State Equestrian Team, won the national championship with a first-round score of 85.5 on Big Shot, a 17.1-hand chestnut gelding provided by Centenary University.

“Going into the first round, I had a couple of questions,” Empie said. "Seeing Ariel, the first ride in the ring did a very tight inside turn to the last jump. I drew Big Shot, who's a fairly large horse, I was kind of on the fence as to whether I wanted to do that. I just decided I wanted to hug the turn, go a little wider and not do that inside turn to the last jump to stay fairly neat. I think it worked out pretty well, and I was happy with my round.”

Earning the reserve champion title with an impressive first-round high score of 88, was Carly Alder Germantown, Tenn,, a senior at Savannah College of Art and Design.

THE INDIVIDUAL Open Equitation On the Flat proved just as competitive as the over fences class with 16 riders competing for the national championship.

“I felt very confident,” said Longest. “I thoroughly enjoyed the horse I was on, so it felt like a great pair and it was a great experience.”

Sophomore Caitlyn Giese of Aylett, Va., of the Randolph Macon Equestrian Team from Ashland, Via., is the first rider in the school’s history to qualify for Nationals, and she beat the field of 16 to win the championship in the Individual Novice Equitation on the Flat.

“This is my first year competing in IHSA due to COVID last year as a freshman,” Geise said. “I've had my amazing coach obviously help me through our regular IHSA shows. I pointed out in the Novice division and I placed second at Regionals. And then I went to St. Andrews for Zones and got first. And now I'm here!”

After a two-year hiatus due to the COVID-19 pandemic, the atmosphere at the National Championship Horse Show is electric.

Coaches, riders and horses look fresh and ready to compete.

Scores throughout the day continued to trend high with the high score of the day being a 90 by Dakota Banks of Dallas, Pa., from University of Lynchburg in the Individual Limit Equitation Over Fences.