LEXINGTON, Ky.--Germany's Michael Jung of fischerChipmunk has two fences in hand with a lead of 9 points going into stadium jumping following the cross country on Saturday, April 30. 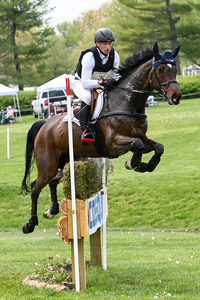 Michael Jung on fisherChipmunk (Photo by Allen MacMillan)Jung, who has won the Kentucky 5* for the  past three years, was one of only three riders to finish the cross country with no time faults to finish on his dressage score of 20.1.

The only other two riders to complete the cross country without a time fault were Boyd Martin of Cochranville, Pa.,on Tsetserleg TSF, who stands second with 29.3, and Phillip Dutton of West Grove, Pa., on Sea of Clouds, who shot up from 31st to stand seventh on 38.8.

Yasmin Ingham of Great Britain is third on Banzai du Loir with a score of 30.9, while Buck Davidson of Unionville, Pa., on Carlevo is fourth with 37.4, followed by Doug Payne on Quantum Leap, 38.4

“I’m just very proud of my horse,” Jung said. “I’m absolutely happy, he is a great horse, he has a lot of talent, super quality. Today in cross county he was so powerful, fast running on the flat, great jumping and his brain was always with me. It was a great feeling just to enjoy the 11 minutes.”

“My guy was great,” Martin said. “We’ve got a great partnership and it was smooth sailing for ‘Thomas’ today, and I couldn’t have been happier with him. He’s in a place in his career where he really knows his job, so it’s a just matter of guiding him. I’m very pleased with how he went today.”

GREAT BRITAIN'S Yasmin Ingham is barely out of the Young Rider ranks, but she showed that she’s ready for this level by galloping home on first-time 5* horse Banzai Du Loir, adding just 2.8 time penalties to slide up one place from 4th after dressage to 3rd after cross country. 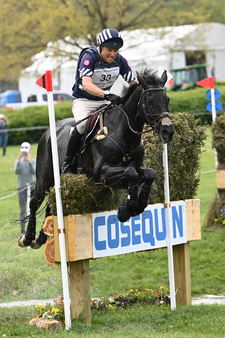 Boyd Martin 0n Tseetserleg (Photo by Allen MacMillan)“I’m delighted with my horse’s first time at this level, he was brilliant at all the combinations,” she said. “The coffin came up early and he was a bit green, but once it was behind him he powered on. He’s an incredible horse to ride, he has all of what it takes. It’s a dream come true to come here and pull that out of the bag.”

Derek di Grazia’s cross country course guaranteed that the event would not be a dressage show, with only 24 of the 45 starting pairs coming home without jumping penalties.

While faults were spread around the course, the coffin combination at number 7, the Park Question was the most influential combination of the day, with even some veteran pairs struggling there.

In addition, the time proved tough to get, even with the near-perfect conditions.

“The track didn’t walk as tough as last year, so I was surprised the early horses struggled a bit with the time and track,” said Martin.

“There were tough questions, big jumps everywhere and lots of galloping. It’s quite a hilly place,” said Jung. “I think it was a tough course, but nice to ride in the end for me.”

If the time seemed hard to get in the CCI5*-L, in was nothing compared to the CCI4*-S, which saw only one rider come home clear and within the time.

A stellar cross country performance from newcomers Dan Kreitl and Carmango moved them from 11th after dressage to the top spot. 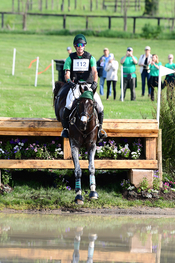 Dan Kreitl on Carmango Photo by Sarah Miller for MacMillan Photography)“It’s a surreal feeling and an honor to be here with these legends,” Kreitl said. “It’s something you dream about and aspire for but you never know how it will work out. But, it worked out today."

Kreitl has an unusual story, that starts with him as what he calls a “broke college student with a vision of going advanced” and ends with him having supportive owners who purchased Carmango to help move his career forward.

“We got Carmango as a 4-year-old,” he said. “We’ve produced from 4 till here, and he’s never had a cross country fault in his entire career. He gives everything he has, he does all three phases in a rubber snaffle and gives 110% every day. He’s the easiest and most willing horse to ride.”

As his riding career progressed, Kreitl became a real estate agent in Indiana, and faced exceptional adversity last year when his pregnant wife was diagnosed with cancer.

He took his horses to Florida with Sharon White, and left them there while flying back and forth to take care of his family and his business.

“I have to give a ton of credit to my coach,” he said. “She kept him fit while I was juggling a newborn in the NICU, working full time in real estate and taking care of my wife.” 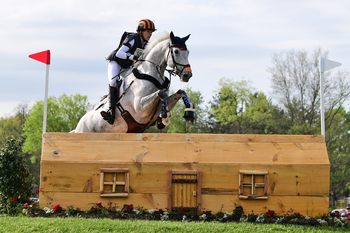 Her other two mounts had trouble on the course, with Cooley Be Cool having 19.6 time penalties added to their score and Halliday-Sharp falling from Cooley Moonshine after a bobble at Fence 6, The Park Question.

“Quicksilver was incredible today,” she said. “He galloped and tried and fought for me the entire way. He’s done his whole career with me, and came out ready to run and did his best for me.”

Phillip Dutton and Quasi Cool added 6.8 time penalties to their score, but it was good enough to move them from 15th to 3rd place.

“He’s been a really good horse, strong in all three phases, but he’s got a bit to learn ," said Dutton. "It’s only his fifth Advanced, but he was game and bold and fast and he got a little strong today.”

Dutton was just happy to be here after a challenging spring that included Quasi Cool suffering a broken eye socket earlier this year that at first appeared to be career ending.

“It looked like it could be a bad tragedy but the vets in Wellington put him back together and got him full sight again, but his schedule was delayed from what it was,” he said.

Much like it’s counterpart in the CCI5*, the coffin at Fence 6 proved to be the challenge of the course, with 20 pairs coming to grief there, including overnight leaders Doug Payne and Starr Witness and overnight second-placed pair Colleen Loach and Vermont.

The final horse inspection is at8 a.m.Sunday and then the final phase of show jumping .

A near-record crowd of 35,794 were on hand to cheer on the horses and riders today in both division.