Tamra Smith, Colleen Rutledge and Doug Payne are first, second and third after first day of dressage in Kentucky

LEXINGTON, Ky.--Californian Tamra Smith on Fleeceworks Royal took the early leader in the CCI5*-L competition at the Kentucky Three-Day Event after the first day of dressage on April 28. 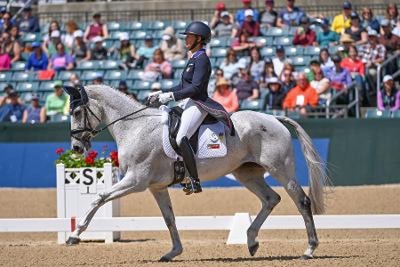 Tamra Smith on Fleeceworks Royal (Photo by Allen Macmillan)Smith leads with a score of 32.9, but she’s less than a point in front of second-placed Colleen Rutledge on Covert Rights who scored 33.8, and Doug Payne on his 2020 Tokyo Olympic mount Vandiver is a close third with 34.9, and all three are riding American-bred horses.

“I was really happy with her. She was with me the whole way and I was thrilled with her, she was awesome,” Smith said.

“I’ve had her since she was 3, so it’s kind of crazy," said Smith. "Every time I’m going out of the start box at Advanced, I’m like ‘but you’re 3.’ It’s special to be sitting on one you’ve produced from scratch, and you think of all the times and the many people she’s bucked off.”

RUTLEDGE and Payne also have long-term relationships with their horses. 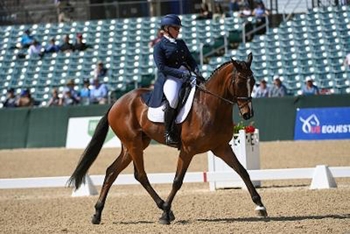 Colleen Rutledge on Covert Rights (Photo by Allen Macmillan)Rutledge bred Covert Rights out of her first advanced mare and Payne’s horse Vandiver is still part-owned by his breeder.

“It feels amazing, to be sitting up here on my homebred out of my first advanced mare," said Rutledge. "He’s a blast to ride every day no matter what. He’s amazing to ride, and he puts a smile on my face every day. I’m having a great time this week so far, and that’s what this is all about.”

“It’s super special, and it’s cool all of us up here are on U.S-bred horses,” Payne said. “(Vandiver’s breeder and part-owner) Debi (Crowley) is with us, and it’s a crazy experience to be able to share their dream, so we’re trying to savor it.”

Saturday’s cross country course is designed by Derek di Grazia, and it promises to be a significant test.

“There are a lot of questions throughout that will be challenging, and the way in which its set up, we will see a lot of different solutions to same problem,"said Payne. "It requires you to be super sharp and reactive and it’s an instinctive test rather than mathematical.”

“The courses are definitely very reactionary, but that’s what a good cross country rider and horse are,” said Smith. “Derek is very clever in how he manages to make something that doesn’t seem like it will, ride hard, so you have to be super focused and never let your guard down.”

“Derek is a genius," said Rutledge. "This is going to separate those that wannabe from those that are, and you’ve got to be able to ride not just off your eye but your leg and your butt. Every fence asks something a little bit different, but everything he asks is clear. Asking one or two questions makes it hard but asking every single one makes relentless, it’s going to come down to the last fence, I don’t think there’s a gimme fence out there.” 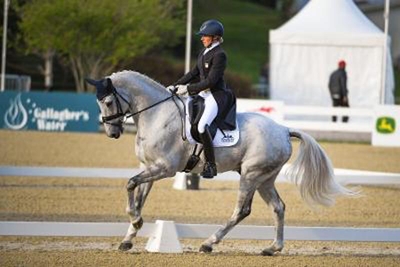 Liz Halliday Sharp on Cooley Quicksilver (Photo by Allen Macmillan)Earlier in the day in the CCI4*-S, Elisabeth Halliday-Sharp took the two top spots after the first day of dressage.

She was first in the ring with Cooley Quicksilver, but didn’t let that intimidate her as she scored 25.7.

“He’s a very good horse, but quite a quirky, wiggly horse,” said Halliday-Sharp. “I had a thought after Pau last year, ‘what can I do with this horse to make him better?’ And I worked hard, and made him stronger, and he was very professional in the ring. His good work now is very good. I’m really proud of him, he tried hard for me and dug in. First to go is not where you want to be, but I couldn’t be more pleased.”

Halliday-Sharp’s second horse, the ebony Cooley Moonshine, a contrast to his silver stablemate, is second on 26.8 and California-based Helen Alliston on Ebay is third on 28.7.

“They are extremely different horses,” Halliday-Sharp said. “Moonshine is less experienced, but I believe he is a world class horse. He can be nervous in the ring, but he’s beautiful and can do a lot of things well. If he loses it anywhere it’s in the walk, he gets a little tense, but was a total pro in there and I think he’s coming along the right way.”

Halliday-Sharp has a third horse yet to compete in the CCI4*-S, with Cooley Be Cool doing his test on Friday. 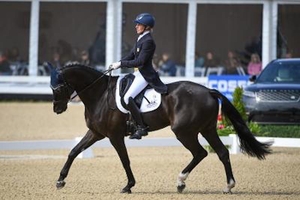 Liz Halladay Sharp on Moonshine (Photo by Allen Macmillan)“I think it’s fabulous and I hope they keep this wonderful opportunity for horses that will be here as 5-star horses in the future,” she said. “It’s such a great opportunity to go down that ramp and go in that arena, and with the crowd, for me it’s an opportunity I’ll target regularly with the up and coming horses. I hope they keep this is a running thing for a long time.”

A Task Force was put together to find Duvander’s replacement during a period of an overhaul for the high performance eventing program, but they didn't announce even an interim chef for a long time, and Phillip Dutton voiced his disappointment with the “lack of urgency” in finding a new leader in an article in Great Britain's Horse and Hound.

Costello’s contract extends until Sept. 30, which will include this year’s FEI World Eventing Championships in Pratoni, Italy.

Originally from Hamilton, Mass., Costello, 56, won a team gold at the 2003 Pan American Games on Dalliance and was eighth individually at the 2000 Sydney Olympic Games on Chevalier.

He’s ridden to the five-star level and is now a coach based in Southern Pines, N.C., at his ROC Equestrian.

He served as chair of the USEF Eventing Selectors, with his tenure as a selector ending after the Tokyo Olympic Games.