Wellington, Fla.--In a surprising finish, a pair of Americans who ride for Israel, Ashlee Bond and Daniel Bluman, finished first and second in the $500,000 Grand Prix CSA5*, the featured event of the 13 week long Winter Equestrian Festival that was competed on Saturday, April 2. 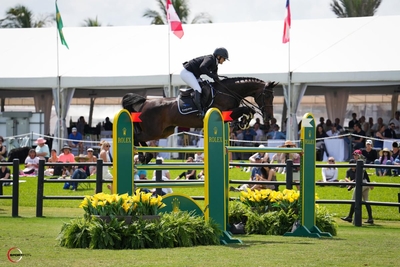 Among those who didn't make the jump-off were many top riders who had been winning consistently throughout the circuit, including McLain Ward, Kent Farrington, Britain's Olympic gold medalist Ben Mayer, Switzerland's Beat Manfl and Ireland's Daniel Coyle and Darragh Kenny.

"It's a long circuit," said past Olympian and present Canadian chef d'equipe Eric Lamaze." ""It's whoever has a fresh horse."

"The course demands a lot of rideability from the horse,"said Canadian Tiffany Foster, who placed ninth with four faults in the first round.

"The course is asking all the questions," said Meredith Beerbaum, a multiple medalist for Germany. "It takes very exact, very precise riding."

SMITH, who had gotten into the class at the very last minute, was the first to go on the grass Derby field, and he made it look easy, but after Smith rails fell at different fences all over the course, with many top riders having rails.

Course designer Guilherme Jorge set a large and technical course befitting a five-star event for the 40 entries that had qualified for the class.

“It’s always very special to build this grand prix,” said Jorge. “I’ve been coming to Wellington since 1999. This is the fifth time in a row I’ve designed the Rolex Grand Prix. Wellington is home now, so for me it feels very special."

“It’s always very challenging to design this grand prix course, because it’s the end of the season,” said Jorge. “This arena itself gives us a lot of variety. I knew I had to build a tough course, because we had a really, really strong group of horses and riders. I made some adjustments in the end because of the heat and the humidity; I took the spread out of the last few oxers, because we are all feeling the weather a little bit. But, it was fantastic jumping and conditions of the field. Everything worked out very well, so I’m really happy with it.”

“I felt fortunate that we got to jump this class last year,” said Reid, who is 25 years old. “I think that helped because I walked the course and felt confident today, whereas last year I was definitely nervous for the track. She’s everything I love in a horse. She has a lot of blood, a lot of character, she’s super smart, and she really tried everything for me today.”

“I really like to add with her, too much I think sometimes, but I walked it and instantly knew a couple of the questions that riders were talking about weren’t going to be a problem for me,” she said. “There were a couple places I knew that she had a fast moving pace where I could do the adds and have time without having to rush.”

“I thought this course really suited a big-strided horse, or a horse like Chloe’s where you can do all the add strides,” said Bond. “It seemed like a really nice course to me. I just had to make sure to come really slow into the triple combination, but she was so rideable and just zipped around there, so it felt really nice.”

“He’s a really special horse, so I’m really grateful to have him back. He’s been really phenomenal since his comeback,” said Bluman of tLadriano Z, who had been out with an injury in 2020 through to September of 2021, when he returned to the international show ring. “When you have a horse like this, where we’ve had a partnership already for many years and he’s been a very successful horse, you learn to appreciate those types of partnerships. When I realized there was actually a chance of a comeback, I made it clear to my team that the idea was to get the horse back in good shape and aim him for the grands prix that we enjoy jumping and that we wish to win.”

Bluman has now finished in second place three times in the finale grand prix of WEF, and he felt the conditions for the day were “amazing.”

“The field looked beautiful, and I think that the Rolex Grand Prix has to feel different than every other grand prix we jump at in Wellington," said Bluman. "That was accomplished today, so congratulations to Gui for that. The win wasn’t meant for me but I’m very happy it was for Ashlee. She deserved it, and she’s a really great teammate. This is definitely one of the most special grands prix in the world, in my opinion, and Ashlee just added it to her list.”

“In the short time I’ve known her, I don’t think I’ve ever sat on a horse so brave,” said Bond. “I jumped almost at the tops of the standards in the warm-up, adding so many strides and going so slow, and she jumps a foot over it. She’s like a rocket, like a ball of power. You can just pull her together and go so slow and so up and down, and then she just explodes. She makes my job really easy; I’m very blessed to have her.”

Bond felt her win was “super surreal” but was validation for her team for “all of the hard times and all of the times you’re unsure of what you are doing.”

She concluded, “You just keep plugging along and trusting in your team and believing you will come out of the other side better. I think it really showed that our perseverance through the circuit, coming together, and fighting through the hard times really works towards the good. Today really proved that.”