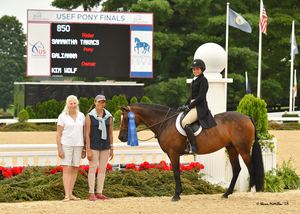 Takacs and Galianna held on to their lead from Thursday’s Model and Under Saddle phases to win.

With a third in the Model phase and a win in the Under Saddle phase under their belt, Takacs and Galianna entered the Over Fences phase with a composite score of 528.02.

WITH A combination of a brave pony and smart decisions made by Takacs, the duo won the Over Fences phase with a score of 256.00, bringing their new total score to 1040.02 and crowning them national champions after just a little over a week of riding together.

“She’s just such a good girl,” said Takacs. “She’ll do whatever you ask her to do, and she’s just really fun to ride. On course, she did everything I told her to do and was so willing. I went in trying my best and wanted to have fun. I’ve been riding her since last week. I just want to thank the owners for letting me ride her.”

Kat Fuqua of Atlanta, Ga., and Brighton, her 9-year-old Deutches Reitpony gelding, were the Overall Grand Regular Hunter Pony Champions, winning for their performance throughout the week at the 2018 Pony Finals.

Fuqua’s trainer, Michael Newman, was the recipient of the 2018 Emerson Burr Trophy.

ON SUNDAY, the Pony Medal Final was the final competition at the Pony Finals, which was won by Tessa Downey, 12, of New York, N.Y., who is trained by Peter Pletcher, 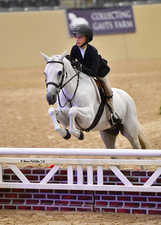 Tessa Downey, Pony Medal winnerHeld in the Alltech Arena at the Kentucky Horse Park, the Pony Medal Final had 184 riders vying for top honors in front of judges Jeffrey Ayers and William Ellis.

The Final consists of two rounds.

In round one, the riders were tested over Jasen Shelley’s technical, yet inviting course.

For round two, 20 riders were called back to put their ponies over a more difficult track to further test their equitation skills.

The course was the same for all ponies, however, the height and distance to the fences changed in relation to pony size.

This was her fourth time riding in the Final, but her first time to make the top 10 and be called back for round two.

“Last year I was watching everyone, and during the final 10 countdown, and I was wishing I was in it, and this year I was,” said Downey. “The suspense was really exciting. Hallelujah was just amazing! His canter is so comfortable; he is just the best pony you could ever dream of.”

Having just picked up the ride on “Louie” this past Wednesday, Downey came to Pony Finals not even knowing whether or not she would ride in the Medal.

Her first time jumping three foot, Downey rode ninth in the order in the second round, so she had to wait for the competitors in the second half of round two to complete their rounds before knowing the result of her efforts.

“It was super nerve wracking waiting to hear,” said Downey. “But I want to thank my parents, ‘Louie,’ my pony, everyone who came to watch me, and all the grooms at Erin Stewart Stables.”