WELLINGTON, Fla--The youngest U.S. team ever, all 25 or under, went up against 11 teams, all of which included Olympic or World Championships veterans, among them a number of medalists, and in a roller coaster of a competition went from last to eventually place third behind Ireland and Canada in the $150,000 FEI Jumping Nations Cup CSIO4* on March 5 at the Winter Equestrian Festival. 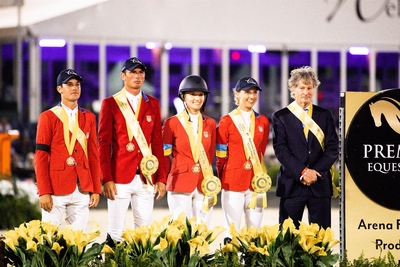 U.S. Nations Cup team with Chef d'Equipe Robert Ridland, far right (Photo by BossMareMedia)This Nations Cup didn't count towards making the Finals in Barcelona, and it was just announced that, due to the current outbreak of EHV-1 in California, the Nations Cup in San Juan Capistrano has been cancelled.

Now the point totals of Mexico, Canada and the U.S. from only two Nations Cup, one in Mexico and the other in Canada, will determine the two teams that go to Barcelona, making it a very tough fight.

Chef d'Equipe Robert Ridland has already said that the team that will go to Mexico in two weeks will also be a young team as the top U.S. riders save their horses for the European tour this summer and the World Championships.

The first round at WEF was in the daylight, and for most of that round it looked like the U.S. wouldn't even make it into the top eight to be able to compete in the second round beginning at 7:30 under the lights.

SPENCER SMITH, 25 of Wellington, was first in the ring for the U.S.,, and had 9 faults on Quibelle, then Natalie Dean, 23 of Palo Alta, Calif., on Chance Ste Hermelle had 8 faults, followed by Tanner Korotkin, 21of Wellington, on Volo's Diamond, who came through with a fantastic clean round.

"Things weren't going so well," said Ridland."At one point, we were 11th of 11 teams. The whole point of taking a young team to these classes is to give them experience, and if they didn't make it to the second round, they wouldn't get much experience."

The U.S. was fifth in the order in the ring, and when Lillie Keenan, 25 of New York, N.Y., on Aran de Baliard went in the ring, she had to go clean to give the team any chance to make it through to the evening,  but even then the U.S.needed at least one of the teams still to go to add faults to their total.

Keenan, under that pressure, rode a beautiful, smooth and clean round, and the U.S., on a total of 8 faults was through to the evening.

Israel, with 16 faults, Brazil, 18, and Venezuela, 23, were eliminated, and, for the evening competition, Argentina, 10 faults, went first, followed by the U.S., 8,  Belgium, 8, Mexico, Australia and Great Britain, 4 each, and Ireland and Canada, both with 0 faults.

The evening competition was amazing as one after another, Olympic veterans had multiple rails and incredible stops, including one veteran Mexican having a stop at the first fence, usually the easiest on the course, and Ireland's Cian O'Connor, an Olympic medal winning veteran, stopping out in the second round..

Smith had a better round with only one rail down, followed by Dean, who was clean, but then Korotkin had two refusals to be eliminated.

"Spencer and Natalie had much improved rounds," said Ridland. "Tanner made a mistake, it wasn't a great ride to the second fence and his horse got confused. Tanner is on the team for Mexico, but that's outdoors in the daytime, so  I don't think any of this will carry forward, Tanner's a good rider. This was his first Nations Cup, and his first round clean was vital. Everyone contributed to this medal."

When Keenan produced another clean round under pressure, there were still three teams that could beat the U.S., but when Mexico's Enrique Gonzalez was eliminated, it moved the team into third, and then when Canada's last rider Erynn Ballard had 15 faults the U.S. was tied for second with Canada on 12 faults apiece.

Ireland won with a total of 5 faults.

There  is no jump-off for any spot but first, so it came down to time, and the aggregate time of Canada's best three riders was just over one second faster than that of the three U.S. riders.

It was pretty amazing," said Ridland. "We were up against some pretty tough teams. It was quite a night. They all rode so well."

"I've made it my priority to have young riders on our teams, but we've never before had a team where the oldest was only 25."

“I can’t remember a Nations Cup in recent history where a team has made it to the podium with everyone at or under the age of 25, and especially, against some really good teams with athletes that have championship experience,” said Ridland. “This is a big deal, and we never catch anyone asleep here in this class - everyone comes to win. This is what we’ve tried to do in the last few years, really have a team for the future that competes here.”

“It’s a formula that works and it’s a great way for riders early in their career to be tested under fire. Everyone contributed tonight. We wouldn’t have been in the second round if it wasn’t for Tanner’s first round and it’s clean rounds that win you Nations Cups and put you on the podium,” he said.

“I’ve jumped quite a few Nations Cup competitions, and this is the first time I’ve ever been the oldest on the team,” said Keenan. “I think for me, it’s so much fun to be on a young team because I’ve always been on the younger end, and we’re all so motivated and hungry to do well, and proud to ride for the team and represent our country,” said Keenan. “We’re genuinely really close friends and it’s an awesome experience to get to compete together and have similar goals.”

The Irish team of Andrew Bourns, Cian O’Connor, Eoin McMahon, and Max Wachman, led by Chef d’Equipe Michael Blake, won the fourth Nations Cup for Ireland in the 21-year history of the class at WEF.

There were only five double clear rounds.

Along with Keenan, Ireland's Max Wachman, Eugenio Garza of Mexico, Lauren Balcomb of Australia and Tiffany Foster of Canada were double clear.