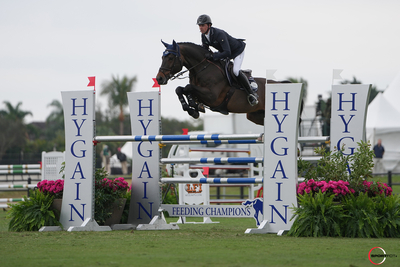 Ben Maher on Tic Tac (Photo by Sportfot)Oscar Soberon designed a course with a variety of questions, including one double and one triple combination, for the 46 entries from 11 nations in the first round, in which 13 were clean while six jumped clean but had a time fault.

Ireland's Paul O’Shea on Machu Picchu, first in the jump-off,  blazed through the timers in 43.88 seconds clean and held that lead until Maher went, fourth from last, on the19-year-old stallion.

Maher shaved mere milliseconds off of the Irishman’s previous leading time and landed at the top in 43.52 seconds.

O'Shea's time held up for second and Canadian Amy Millar was third on Truman in 43.99.

“Clearly, he loves the grass field, as he was amazing here last year for me as well,” said Maher, referring to his win with Tic Tac in this same event in 2021. “We are very selective when we show him now because of his age, but he is an amazing horse, and I give a lot of credit to the people who look after him day in and day out to keep him in such top shape.”

MAHER had not ridden Tic Tac for four months until a week ago as he was frequently traveling in Europe and the stallion makes his permanent residence in Wellington, Florida.

“We just emphasize keeping him fit and happy and knowing how to pick the right moments for him,” said Maher. “I am very fortunate he has all the experience he does and allowed me to really ride him today, because you have to take a lot of chances to be ahead of Amy and Paul.”

“He has been a fantastic horse for me and has really brought me up to a new level in my career,” said O’Shea. “He tries his heart out each time, and I am very grateful to everyone involved that I am able to ride him.

“At the end of each year, we normally give him a long break but then struggle a bit to get him fully going again,” said O’Shea. “This year we kept him going, and it seemed to work better for him to just continue moving.”

“For the past 12 months or so, I have been really focusing on getting him faster in the jump-off and, while I may be third, this is as fast as I’ve ever gotten this horse to go,”said Millar. “I am thrilled because I feel like I am finally turning a corner. I think it’s important for anyone trying to develop horses and develop themselves to realize that it isn’t easy, but you must always keep trying and learning. It is not always uphill but days like today make it worth it.”

At the end of the class, O’Shea asked Maher what all show jumping fans want to know: “Will Explosion W be making an appearance this winter?”