WELLINGTON, Fla.--Eoin McMahon of Ireland experienced his first WEF victory as he rode Chacon 2 to win the $37,000 WEF Challenge Cup Round Two CSI3* on the Derby Field at Equestrian Village on Thursday, Jan. 21. 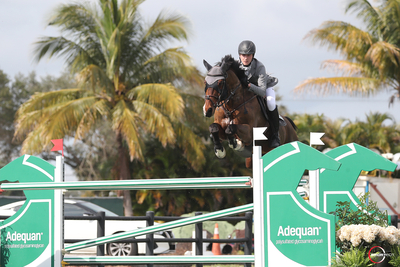 Eoin McMahonon on Chacon (Photo by Sportfot)The Challenge Cup was the only event of the day held on the grass track, and 58 top entries competed over Oscar Soberon’s course.

Halfway through, only nine were set to advance to the jump-off, including Shane Sweetnam of Ireland, Margie Engle and the previous day’s $37,000 1.45m Classic winner, Daniel Coyle of Ireland.

By the first round’s end, six more entries had gone clean, making a total of 15 set for the jump-off..

Egypt’s Nayel Nassar was the first in the jump-off to go clean on Coronado but Katie Dinan soon went into the lead with Dijon Terdoorn Z, followed by Coyle, who knocked over three seconds off Dinan’s time to finish on 42.58 seconds on Carlyle.

As one of the final riders in the jump-off, McMahon finished in a blazing 40.29 seconds.

“HE IS A REALLY special horse. I think he is honestly my best horse,”said McMahon. “We did the European Championships last year and were in the top 10, but with all the cancellations in Europe we decided to be a presence here this year.”

The win is the first of its kind for McMahon who has never previously attended a WEF circuit.

“It is amazing here,” he said. “The facilities are top class, and I have never seen a surface as good as the grass here. The horses just fly on it. Our original plan was not to compete this particular horse until the five-star weeks, but I decided to do him this week simply because I wanted a chance to jump on this field.”

Hutton on H&M Kirlo Van Den Bosrand was second in 42.25 seconds and Ballard on Comedy De Talma was third in 42.41 seconds.

In the International Arena, the day started with the $6,000 1.40m Speed Challenge won by Conor O’Regan of Ireland on Carmen de Bonnieres  who finished in a blazing 53.955 seconds, a full second faster than second-place finisher Kamille Macussen on Freedam, who finished in 55.166 seconds.

Close behind them was Laura Chapot, this time on Calafornia, who finished in 55.202 seconds for third.