WELLINGTON, Fla.--Daniel Coyle of Ireland on Tienna won the $37,000 1.45m jumper speed class with international jumpers getting their first chance to contest the grass. 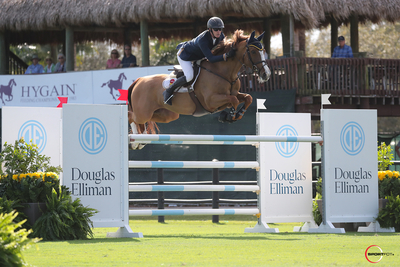 Daniel Coyle on Tienna (Photo by Sportfot)The Derby Field at Equestrian Village will play host to a variety of FEI jumper classes during WEF 2.

Fifty-nine competed over Oscar Soberon’s speed track but none were able to catch Daniel Coyle’s blazing time of 65.56 seconds.

McLain Ward had the lead fairly early in the day in a time of 66.30 seconds until Coyle managed to shave a little less than a second off.

“Ariel and I had talked about when we wanted to start her, and we came to the conclusion of this week,” said Coyle. “It is always nice to start on the grass because it is a long winter.

“She is very competitive as you can see,” he said. “Everything just showed up lovely today, and she is just naturally so very fast. It was a great feeling going through the finish and seeing our time because I knew McLain had set a hard time to beat.”

COYLE started riding Tienna when the mare was 8 years old, and this win was extra special as he said that an injury had previously forced a break for two years, so this was their first time back in FEI competition.

“When I first began riding her, I knew she was by far the most talented horse I had ever ridden, and we kind of grew in our careers together,” he said. “I’ve been lost without her for the past two years, and I can’t put into words how glad I am to have her back.”

A tight time allowed definitely played a factor today with 10 riders accruing time penalties alone and many others picking up additional jumping faults, so just 12 were clean.

Raleigh Hiler withdrew from the jump-off, which left 11 to contest the short course.

The first in the jump-off was Shane Sweetnam of Ireland on James Kann Cruz, who was clean in 32.610 seconds. I

t took a few more rides before Driscoll jumped the second clear of the day with Flotylla, setting the new time to beat at 30.804 seconds, which held up for the win with  Sweetnam second and Zoe Conter of Belgium on Dawa de Greenbay Z third place in 33.676 seconds.

Driscoll, originally from Elk Mills, Md, rides with the Prudents at Plain Bay Sales based primarily in Middleburg, Va.

She got the ride on Flotylla in October, and they have been getting to know each other, placing ninth in last week’s $30,000 National Grand Prix and winning the qualifier today.

“We’ve been building up a partnership," said Driscoll. "I’ve done maybe four or five shows with her, and I feel like I’m really in a good place now.”

“She’s a real competitor in the ring, and she has that same personality back in the barn,”said Driscoll. “She wants to go in the ring and do a good job, and then go home.”

“She has a big stride, and she’s a little bit aggressive, so I thought the lines worked to my favor, that I was able to let her kind of hunt on down there and just flow around,” said Driscoll.