WELLINGTON, Fla.--Germany's Frederic Wandres topped off a winning week with yet another win, this time on Harrods 3 in the Future Challenge Young Horse Grand Prix Series competing in the FEI Intermediate II test. 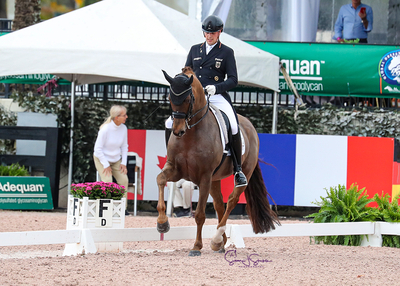 Wandres capped a week already replete with wins, two courtesy of his Grand Prix horse Bluetooth OLD, with another victory, riding the 9-year-old Harrods 3 to 74.352 percent.

Wandres, who successfully competed Harrods at last year’s AGDF in Prix St. Georges, said: “I felt already last year that there is so much talent in him, and we just have to bring it into the arena now, which is sometimes not that easy. At home you feel what your horse can do, but to bring it inside is something else. But I’m super happy with him and he feels fantastic.

“FOR COMPETING in the Intermediate II, you have to train all of the exercises step by step,” he said. “Then you have to bring it all together, like a puzzle, and connect it. The piaffe-passage, the whole pirouettes, and the changes, that takes so much energy out of the horses, more than you expect sometimes. You have to do it step by step over the winter and then try to bring it together. The horse is getting more power by doing it.”

With threatening skies that would open up at the conclusion of competition, Wandres was confident that Harrods would be solid no matter what.

“He can handle nearly all kinds of weather," said Wandres. "I thought the connection of the whole test was good. I had a small mistake in the two tempis, but that can happen to a young horse. I felt he was in front of me and willing to do everything. I love him, and I think he’s exactly where he has to be.”

Kelly Layne of Australia was second with a 72.381 percent test on Fernando.

She went one better in the Future Challenge Young Horse Prix St. Georges class, winning it from last draw with 67.734 percent on the 9-year-old Safira 66.

“She’s always been scared about things on the ground and nervous even of the rider, so you have to be really careful,” said Layne, who competed Samhitas at the Tokyo Olympic Games. “Safira is super sensitive to ride, and you have to be gentle. I just coaxed her round out there today to give her a good experience, and I’m thrilled that we are the winners. It wasn’t really expected, but I think that’s the quality of horse I’m sitting on. I can’t believe in my life that I get to sit on a horse like that. She’s like flying a kite, and it feels like you’re going to lift off any second.

“The feeling she gives in general, like when she trotted out of the halt, is that you’re on an international horse and you feel that right away,” said Layne, who has been riding the Spörcken daughter for two years. “I was really happy with my trot half-pass to the right — it was awesome! The left is normally the good one, but she was a little bit looking and I pushed too hard, and she cantered.”

Layne has ridden five different horses in the Future Challenge Series and appreciates the opportunity for young horses to compete against one another at Dressage Festival.

“I love it,” she said. “It’s a great avenue for the young horses, and we love the prize money at the other end because it makes it exciting and helps get people’s support to want to put their horses in these classes. We always follow these classes because these horses are the superstars of tomorrow.”

Canadian rider Shannon Dueck was second on the youngest horse in the field, scoring 66.882 percent on her 7-year-old mare Angelika MW, by Franziskus.

Both Layne and Dueck have qualified their mounts for the final during AGDF 11.

Christina Vinios, who is based at Five Rings Farm in Wellington, continued her winning streak with the 18-year-old Del Gado gelding Deauville in the pair’s first international show.

They are now two for two, having scored 66.206 percent in the Intermediate II CDI2* class.

This was Vinios’s first international show since 2016,when she campaigned Folkestone OLD at small tour, and her first big tour CDI.

Another American rider having a red-letter week is Ali Potasky, who won at small tour for the third time.

On  Irintha, Potasky scored 73.455 percent in the Intermediate I Freestyle CDI2*, with one judge awarding over 77 percent.

This is the Everdale mare’s first international show.