WELLINGTON, Fla.--Spencer Smith of Wellington rode Ayade Hero Z to win the $140,000 Grand Prix CSI3* at the “Saturday Night Lights” series on Jan. 15, while earlier in the day in the International Arena McLain Ward on First Lady won the $30,000 National Grand Prix. 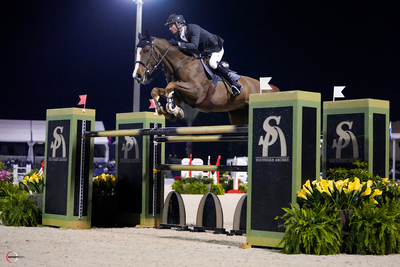 Spencer Smith on Ayade Hero (Photo by Sportfot)There were 45 entries in the $140,000 Grand Prix, the biggest class of the week, and eight were clean to make the jump-off.

Starting out the jump-off with a bang was Olympic team silver medalist Kent Farrington on Orafina, who set the time to beat at 36 seconds flat, which would hold up for second place.

Farrington has had Orafina in his barn for nearly a year and recorded consistent top finishes at the 2021 WEF, Kentucky, Tryon, Knokke in Belgium and Valkenswaardin the Netherlands, along with a win in Calgary at Spruce Meadows.

With Orafina as a younger horse moving up and competing in her first night class under the lights at WEF, Farrington thought the mare jumped “exceptionally well.”

“I HOPE SHE keeps growing in confidence like she showed tonight and that I can finish out the season with a much stronger horse that’s ready to do some bigger things,” he said.

“Igor was phenomenal tonight. I didn’t think I could have done much more without letting him unravel,” said Nassar. “I just wanted to keep things together and keep him jumping well. We have a whole circuit ahead of us.”

Nearly two years ago, Nassar took over the ride on “Igor” but in 2021 they raised their level, winning the Longines Grand Prix of Switzerland CSIO5* in St. Gallen, the CNOOC International at Spruce Meadows ‘Masters’ CSI5*, the new CaptiveOne Advisors Grand Prix of Greenwich CSI3*, and the Notrex®Vet Grand Prix CSI3* in Wellington during the ESP Holiday Series in November. They also had a clear first Individual round at the Tokyo Olympic Games.

“I have to say that he’s really been hitting his stride,” said Nassar. “He’s finally really finding the consistency. This is a level down from what he’s used to jumping but it’s early in the season, and I thought it would be great to get him out here under the lights. I was just really pleased with how he jumped. My plan is to hit most of the five-star grand prix that will be under the lights with him, and then fill in the gaps with the other horses.”

Smith on Ayade Hero Z brought the winning time down to a blisteringly fast 34.31 seconds to win.

Leaving out a stride in the first line was not originally in Smith’s plan.

“I thought it was a big risk for sure,” he said. “I wasn’t planning it, and then going to it I thought she was in a good rhythm, and I got a good jump to number one. I just let her get down it, and she ate it up easily so I took the risk. I think to try to beat these guys you have to take a big risk, and either it pays off or it totally doesn’t.”

“As Spencer said, he took all the risk," said Farrington. "He deserved the win today. I thought he had an amazing round, but I’m very happy with my horse, and it was a great way for her to start the season.”

Two more were double clear on the night: 19-year-old Tanner Korotkin on Volo’s Diamond was just off the pace in 36.85 seconds for fourth place, while right behind them in fifth place was Hector Florentino of the Dominican Republic on ABC Quantum Cruise in 36.89 seconds.

“We have had her since she was 7 from Eric Lamaze, and she’s just been produced by me and Ransome back and forth, which I think has given her a lot of maturity,” said Smith.

With a tour of five-star events under her belt last year, Ayade Hero Z has “come back in a different state of mind, a different league now this year,” said Smith. “The experience of jumping really big tracks at different venues and traveling and everything made her strong, and I think mature in her head and in her body actually.”

Having grown up in Wellington, Smith was thrilled to win in his hometown in front of his whole family.

“I have amazing support, and it’s been a great night,” he said.

Smith and Rombauer, who will compete in the Hermès Under 25 Grand Prix Series, will both continue to take Ayade Hero Z into the show ring during this circuit.

Smith added, “I hope Ransome can have a win. It would be cool to have both of us have a big win this winter. I think that’s kind of rare in our sport.”

During the day in the International Arena Ward on First Lady won the $30,000 National Grand Prix. 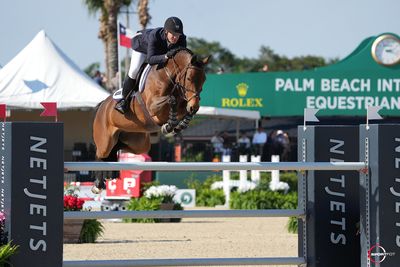 McLain Ward on Ffirst Lady (Photo by Sportfot)Thirty-eight entries competed over the course designed by Anthony D’Ambrosio and Andy Christiansen Jr. of Ecuador,, with 10 horses going clean to advance to the jump-off.

First to jump off was Jennifer Waxman, who set the time to beat at 43.786 seconds on Scato van de Molenbrug Z.

With each round, the jump-off got faster and faster until  Ward crossed the timers in 39.125 seconds.

First Lady is a star in the making that has been with Ward for two years.

“Robin Parsky bought First Lady for me to bring along in the sport from René Tebbel," said Ward. "His daughter, Justine, had been bringing her along from the beginning. The Tebbels did a beautiful job of producing her, and we’ve just tried to continue that on.”

Ward and his team have developed First Lady slowly through her 7 and 8-year-old years.

Last year as an 8-year-old she competed in two-star grand prix classes at the end of the summer.

Now the mare is coming into her own with a ninth place finish in last week’s $25,000 Classic and a win today.

“She started off this year as a 9-year-old just spectacular, and we’re really excited about her future,” said Ward. “I had a plan, and she’s answering all the questions so easily. Maybe the plan is growing a little bit.”

Ward is thinking about moving First Lady back up to the FEI divisions this circuit, but he is still measured in his approach.

“We’re going to move up and down, he said. “She’s still young, and she’s super careful. We want to be cautious, but she’s doing it really well.”