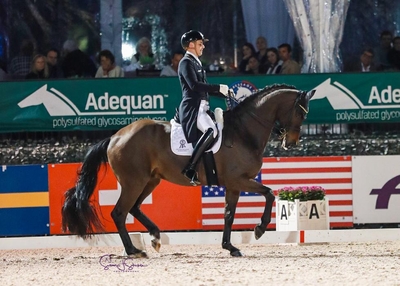 “I felt super tonight,” said Wandres, who also topped the Grand Prix. “My best score was 79 percent in Aachen in the four-star CDI, but today 81 percent is really something fantastic and incredible.

“Bluetooth is still a little bit green here and there, but he has still not had 10 international grands prix on his board, so he’s a young one. I’m super happy that he’s in that atmosphere and really delivering that kind of super results.”

BUFFINI, who is only in her second year of grand prix, logged a personal best of 78.485 percent, with one judge awarding over 80 percent.

“I really came into this season with not a lot of expectations, and I still haven’t had the mare long,” she said. “We upped our degree of difficulty to 10 a few weeks ago because we knew we needed to be harder, and to come out here and do what she did was incredible.”

"Davinia La Douce is so expressive when she clocks out her passage, and she goes in those extended canters." said Buffini, 27, who trains with Gunter Seidel. "She’s not a huge mare, she’s not the biggest-moving mare, and she gives absolutely everything she can every single time.”

“Havanna is very lit up by the atmosphere, but I think it speaks volumes to the fact that she went in the ring and tried her heart out,” said Holzer, 58, who competed for Canada at four Olympics before switching her nationality.

“The only mistake she made was completely my mistake, trying a little too much," said Holzer. "She’s just showing me this year how much she’s trying, and to feel your horse try that hard, especially when they’re feeling the tension of the spectators, speaks volumes.”

Judge at C, Colombian Cesar Torrente, was impressed by the quality on show.

“We saw amazing sport today,” he said. “All three top riders showed really good riding. The first-place horse had amazing gaits and was very expressive in the passage-piaffe tour and was fault free. It was wonderful to see this good riding, good dressage at the beginning of the season.”

It was a tight race for the win in the Grand Prix Freestyle CDI4*.

Both Jennifer Williams and Susan Pape of Grat Britain scored over 77 percent, but it was the previous day’s victor, Williams, who won once again, taking her prize-money earnings to $5,500 in 24 hours.

Riding the 19-year-old gelding Millione, who is six years older than any of his challengers, Williams pulled off a career-high score of 77.175 percent, with Pape trailing by just 0.17 percentage points on Harmony’s Eclectisch.

This was the second career personal best set by Millione in two days.

“He gave me the feeling again that I could relax and push things more forward and more soft,” said Williams, who had never won a CDI test at AGDF until this, their third season. “He was a bit more excited than I was expecting, so I had to ride him a bit safe. I could feel that if I went one step too quickly, I might get a canter transition in my trot and passage half-passes.”

Her viking-themed music was tweaked it for Friday’s victory.

“We added a bit more time in the pirouettes and then took a little bit of time down the final centerline,” she said. “We ended with piaffe to the halt, so that was new, and I think he enjoyed that. He gets pretty spicy and ready to go on that last centerline, so that worked out well.

“Last year I was the bridesmaid many times, and I was still very proud of him then,” said Williams of Olympia, Wash. “But today I was mistake free, and I felt like he could shine through in the harmony this time, so then to win on top of that is pretty special.”

Ali Potasky made it two wins from two small tour starts this week on Irintha.

She won the two-star Intermediate I CDI2* with 69.677 percent, with judge at C, William Warren awarding almost 72 percent.

This is the Everdale mare’s first-ever international show.