WELLINGTON, Fla.--Richard Vogel of Germany won the $37,000 WEF Challenge Cup Round One CSI3* on Caramba 92 on Jan. 13, while Jennifer Bauersachs of Frenchtown, NJ, rode Alistaire to win in Green Hunters, 3'6" in week one of WEF, 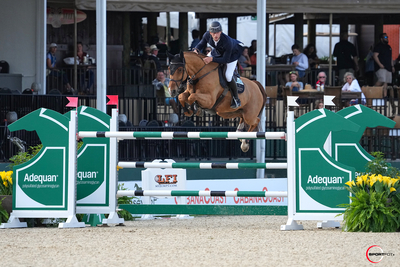 Richard Vogel on Carambe 92 (Photo by Sportfot)The Challenge Cup had 57 compete over Anthony D’Ambrosio’s and Andy Christiansen Jr.’s first-round course, but only nine were able to finish fault free.

Last to jump clean was McLain Ward, who elected to withdraw from the jump-off, which left eight riders vying for the top spot.

First to go over the short course was Conor Swail of Ireland on Gamble, who set the time to beat at 38.66 seconds to eventually finish fourth.

Lauren Balcomb of Australia on Verdini D’Houtveld Z shaved fractions of a second off of Swail’s time to finish third in 38.63 seconds.

Then it was Daniel Bluman riding for Israel who overtook the lead in 37.15 seconds on Cachemire de Braize, but iIn the end, it was Vogel on Caramba 92 who won in 37.07 seconds.

“I WAS VERY happy with the round, but I didn’t expect a win today, because normally in the first days he’s a little bit spooky," said Vogel. "I was very, very happy that he was actually so good today already, because normally he gets better and better the more rounds he gets. I hope we can keep that.”

“We can’t ask for any better here, so for us it’s the best place to bring the horses along,” he said.

“I don’t want to do too much with him since he has so much quality,” said Vogel. “I just want to go step by step and see how he feels and what feeling he gives me if I can step up, or if I should wait to make the next step. Take the time.”

“I like all my horses, but with this one I think I really have a special bond, and we really fight for each other,” said Vogel.

“In the stables, he’s quite a little bit a diva, and he really is the boss,said Vogel. “Then out here, as soon as we get to the warm-up or in the ring, he’s a little bit more ‘Okay Richie, now you’re the boss. Please, help me.’

“He wants to get a bit of confidence from me, so around the ring my job is to give confidence to him,” he said. “In the stables and everywhere else, he feels like he’s the boss, and that’s good. That’s how it should be.”

BAUERSACHS of Frenchtown, N.J., on Alistair, was the only one to pin in every class, as Alistair earned scores of 85, 86, 87, and 88 to win the championship in Green Hunter 3'6" that had 25 horses in the division over two days during WEF 1.

Jennifer Bauersachs and AlistaireWith lots of variation in who placed in the top six spots from class to class, only Bauersachs was consistent throughout.

“I was really proud of him,” said Bauersachs. “Of course, these are the first shows at 3’6” for a lot of horses, but this is only his second show of doing it, and he’s really handled it so well. He feels like he’s having fun!”

Bauersachs is no stranger to talented horses with countless championships in the hunter divisions at top shows, but this one is a little different than some of her other rides.

“His brain is just unbelievable,” she said. “He’s brave at the jumps, he doesn’t care about things around the ring, and it’s a pleasure to have an easy horse for a change. He just really enjoys it; he has a good time.”

“He’s funny and has a lot of personality, but all in a good way," she said. "If you pass him on the crossties and you don’t acknowledge him, he stomps his feet as if to say, ‘How could you just walk by and not say hi to me?’”