WELLINGTON, Fla.--McLain Ward on Catoki won the $75,000 Grand Prix on Jan. 9, the final event of the first week of the Winter Equestrian Festival. 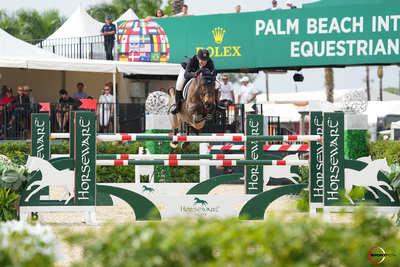 McLain Ward on Catoki (Photo by Sportfot)From a starting field of 32, eight were clean over a course set by Eric Hasbrouc).

First to return for the jump-off was Thursday’s  WEF Challenge Cup winner, Hector Florentino of the Dominican Republic on ABC Quantum Cruise, and he set the time to beat at 37.677 seconds with a clear round.

“Thursday’s win definitely set up for this jump-off,” said Florentino. “I’m learning to ride this horse a little bit. He wants to go and be fast. Before, I wasn’t sure if I could let him go because I didn’t know if I could bring him back. We’re starting to know each better, and I can let him open up now. He’s coming back to me. I’m very happy."

“I’m really very lucky because a couple months ago, I didn’t have any horses to ride and now I have two,” said Florentino. “I need to thank Michael Dorman and Ronnie Beard.”

IMMEDIATELY following Florentino wasHeather Caristo-Williams on Marciano MVF, who was just off the pace in 38.339 seconds with a clear round, which left them in fourth place.

Next into the ring was Michael Murphy on Catoki’s Son Z, who took the lead in 37.642 seconds by three-hundredths of a second with no faults, which would hold up for second place.

Murphy originally had the ride on Catoki’s Son Z in May.

The horse was sold shortly thereafter but came back when the Ahearn family of Esperanza Imports LLC purchased the 13-year-old Zangersheide gelding at the end of the summer for Murphy to compete.

“Being able to watch Hector go, I knew I had to go pretty fast,” said Murphy. “I think definitely McLain for sure got me – ok, everywhere – but especially to the vertical before the double combination. I got a little wider there, and he was tighter there. I was pretty happy with my horse. It was the best that he could do today with me.”

Four horses later in the jump-off, Ward and Catoki blazed through the jump-off in 36.008 seconds for victory.

Along with Catoki’s unique way of going, he also has an unusual program for a top show jumper.

The little horse last competed at the Washington International Horse Show in October, where he won the speed final and tied for the puissance victory, and then lived in a field until five days ago.

“We have a very strange program with Catoki because he’s obviously very hot and very aggressive,” said Ward. “He’s just purring now actually. He’s just unfit enough to not be totally running away with me! He goes well in the program, and he’s very happy. He was good in the class earlier in the week, and I thought he performed really well today.”

Ward said that Catoki follows a similar plan while in Wellington, enjoying turnout as much he can in the days that he is not at the horse show.

“Once in a while we try to do a gymnastic, but it goes quite quickly,” said Ward. “He has so much fire, so much adrenaline; he’s such a competitor. That’s the way we try to keep that under wraps. It’s pretty remarkable. Along with his puissance win at Washington and that kind of program, it just goes to show his eagerness and bravery. He’s a little lion.”

While Ward’s and Murphy’s horses are by the same sire, Ward feels that “his” Catoki is “a pretty unique model.”

“It’s pretty hard to explain and replicate it at that level, but they’re ‘blood’ and fast and typically quite careful," he said. "I’m sure those characteristics are there. As we always say, the mother plays a bit more of a role.”