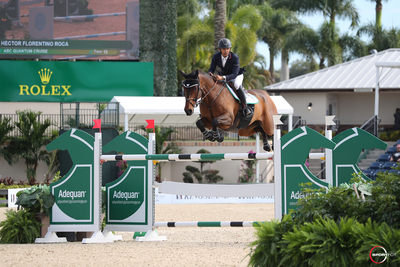 Hector Florentino on ABC Quantum Cruise (Photo by Sportfot)It was a good way to start the circuit for Florentino, who has only ridden ABC Quantum Cruise for two months after owners Ronnie Beard and Michael Dorman asked him to ride the horse – which previously competed with Harry Charles of Great Britain – as well as their second horse, Meadow Vale Cruise.

Beard. who previously had farms in Virginia and Pennsylvania, now keeps his stable in Wellington.

“I had another horse that belongs to Spruce Meadows, and my deal with them was up through the summer, going to Tokyo,” said Florentino. “God answered my prayers, and Ronnie called. I’m very happy to be back showing at WEF and to have these competitive horses.”

IN A 35 horse field, Florentino was one of five that advanced to the jump-off over a course designed by Eric Hasbrouck. 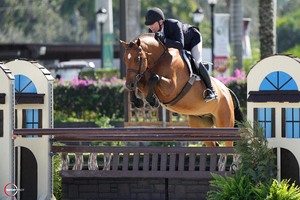 Scott Stewart on For Always (Photo by Sportfot)First in the jump-off was Jordan Coyle of Ireland on Centriko Volo, who had a rail for four faults in 38.289 seconds fto place third.

The only other jump-off clear round to place second was Nicholas Dello Joio on Cornet’s Cambridge, who finished in 41.001 seconds.

Going last in the jump-off, Florentino and ABC Quantum Cruise was clean in 40.495 seconds for the win.

“I don’t have to ask him to be fast, I actually have to ask him not to go so fast," said Florentino. "This is our second jump-off together, and it felt very good. I take advantage because he has a favorite side. He likes to go left a little bit, so whenever there is a left turn, he can do that really fast, like to the last jump. Also, from one to two, he got there really quick. He just covers the ground really quick. To the combination, I wanted to slow down because turning right to it was going to be harder. Even slowing down there, he was able to be quicker because he’s fast across the ground.”

Earlier in the week, Laura Chapot of Neshanic Station, N.J., who has been circuit Leading Jumper Rider countless times, picked up just where she left off last March.

With an almost perfect clean sweep, Scott Stewart of Flemington, N.J., rode Betsee Parker’s For Always to the championship in the Green Hunter, 3'9". with four firsts and one second place ribbon on Jan. 7.

“He felt great, jumped great, the courses rode nice, and he felt fresh again," said Stewart. “He was a first year horse last year, but we did the high performance too. He was champion at Capital Challenge, Harrisburg, Washington International, and the National Horse Show. This is his first time back since November.”

“He’s very sweet,” he said. “He can be nervous to ride; you can’t be rough with him at all. You have to be very gentle with him. He’s a little fragile that way, but once he trusts you, he’s one hundred percent.”

Stewart also topped several other divisions during the first week, winning the championships in Conformation Hunters, Green Hunter 3’6”, and High Performance Hunters with Ackergill Castle, Ever After, and Love Note respectively.

The reserve champion ribbon in the Green Hunter 3’9” went to Laskano, ridden and trained by Jimmy Torano, who won four second places and a third place in the division.