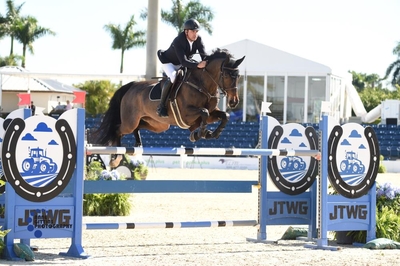 Santiago Lambre on Easy Girl (Photo by Anne Gittins Photography)Twenty-two competed over the course designed by Héctor Loyola, with 10 going clean to qualify for the jump-off.

“I’ve had Comtess since the beginning of the year," said Lambre. "The owner is a long-time supporter of my brother and I. She jumped the 4* Grand Prix here a few weeks ago and just had one time fault, and I wanted to jump her again after having two weeks off to keep her fit and ready for the season. We’ll compete in another National Grand Prix, and then, at the end of January, I’ll probably compete in the 4* Grand Prix and hopefully a 5* Grand Prix later in the season.”

Of the 10 that advanced to the seven fence jump-off, just two were able to go clean.

THIRD TO GO in the jump-off, Lambre on Easy Girl was the first to go clean in a quick 37.66 seconds.

Lambre and Comtess 202 had one rail early in the course but were still able to claim third after stopping the clock at 39.898 seconds.

“I knew I had really fast riders behind me, so with Easy Girl I tried to take all the risks I could, and it worked," said Lambre. "With Comtess, I had an early fault, so I just tried to be the fastest four-faulter. I really like having the national Grand Prix competitions here because they’re a great opportunity to practice in the show ring with the horses to keep them fit without having to jump too big."

Lorcan Gallagher of Ireland on Ariana won the $10,000 Open Stake on Tuesday, which was an incredibly tight race for first, with the top six finishers all completing the jump-off course within one second of each other.

Edging ahead of the pack by mere milliseconds, Gallagher (was clean in 38.48 seconds, narrowly beating second-place finisher Lambre, again on Easy Girl , clean in 38.57 seconds. Third was David O’Brien of Ireland on Gerko, clean in 38.87 seconds.