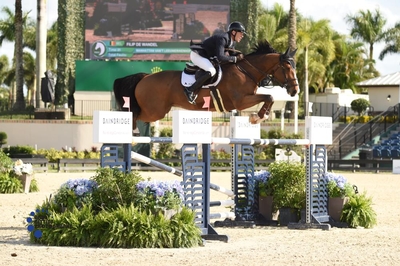 “Manhattan is a 9-year-old that arrived in the United States in June, so I showed him a little bit this summer and he did well in some national grand prix classes," said de Wandel. "I gave him a little bit of a break in September and I started showing him again in November to get him ready for the season. I’m hoping to compete him in some 3* classes this winter season. I’m very happy to win today. He was already second two weeks ago, so I’m pleased to have success with this horse already.”

Only three made it to the jump-off in the $50,000 Grand Prix from a starting field of 30 entries representing 12 nations, with Wilhelm Genn of Germany on Bugatti finishing second with four faults in 41.69, and Ava de Caster on Carlotta 289,placing third, also with four faults in 42.46..

“I think the timing was a little bit of a factor in the first round, so you had to ride the pace a little bit. Anytime you have to think about pace, then the more technical parts get more difficult,” Genn remarked. “Luckily for me, it’s never an issue because my horse has so much action naturally. When Jessica [Mendoza] had a rail down in the jump-off, I just wanted a double clean. I kind of let go of the reins and he ended up being super fast. He has so much action; it’s easier to go fast than controlled.”

“We’ve had him since he was 5," said Genn. "He’s been really difficult as far as training goes because he’s so sharp and wound up, but always a winner, even as a 5-year-old. Every step of the way he has been a winner. I’d rather have a horse that bites me every once and a while but still wins some ribbons.”

On Jan. 5, the  Winter Equestrian Festival will begin its Premiere Week.