LEXINGTON, Ky.--Amanda Steege of Califon,  N.J., won one of the five regional championships of the International Hunter Derby. 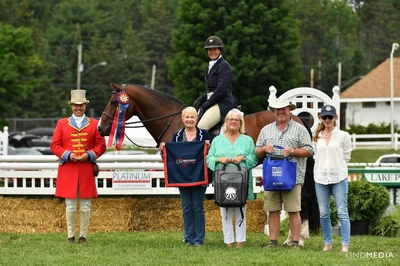 Amanda Steege on Lafitte de MuzeThe first year of the USHJA International Hunter Derby Regional Championships wrapped up after five championships were held across the country.

Exhibitors did not need to qualify for the Championships and chose to compete in any one regional of their choice.

THE NORTH Central Championship began the Regional Championships at the Split Rock Hunter Jumper Classic I CSI3* on held June 9-13 in Lexington, Ky., with Havens Schatt, of Georgetown, Ky., on Ken and Amy Wexler LLC's Cascartini taking the top prize.

Jean Sheptoff, of Littleton, Mass., on her own Camillo VDLwas reserve.

The Aiken Fall Festival I hosted the South Championship, Sept. 8-12 in Aiken, S.C.

Alexandra Ansteth of Spring, Texas on Tori Wiesner's MTM Hay Day won the title, and Katia Cannon, of College Station, Texas, on her own Canal Street was reserve.

The championships wrapped up with the Southwest Championship at National Sunshine Series II on Nov. 9-14 in Thermal, Calif..

Nick Haness, of Temecula, Calif., on Caldiano, owned by Double Down Farm, LLC, was champion. with Shawn Casady, of Harriman, Tenn., on Ashland Farms' Cassario 8 reserve.

In 2022, horses may compete in a maximum of two Regional Championships per year, and competition returns with six championships for exhibitors to choose from: