WELLINGTON, Fla.--Wellington geared up for the Winter Equestrian Festival with five weeks of the Holiday & Horses CSI4*, and Irishman Simon McCarthy riding Gotcha Get won the $37,000, 1.50m Classic CSI4* on Sunday, Dec. 5. 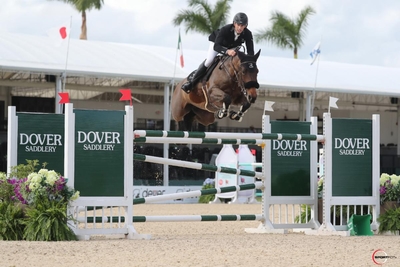 Simon McCarthy on Gotcha Get (Photo by Sportfot)As the final FEI class of the week, the 1.50m Classic CSI4* featured performances from 21 exhibitors over courses designed by Anthony D’Ambrosio, with seven from the United States, Ireland, and Canada going clean to advance to the jump-off, and a smaller group of four going clean in the jump-off.

“Since I won today, I have to say I thought the courses were great," said McCarthy. "The courses were fair without being overly big. The first course was long enough and the last line caught a few people, plus there were some careful spots with the skinny to the liverpool, and then a scopey oxer to finish. You needed some gas in the tank to finish up that last line without faults. The designer did a fantastic job.”

THIRD TO RIDE in the jump-off, McCarthy on Gotcha was clean in 38.25 seconds to win after finishing second on Thursday in the $6,000 Holiday & Horses Opener CSI4*.

“Gotcha is a 10-year-old mare that I have been riding for about a year," said McCarthy. "This is actually the first class we have won together. We have been second quite a few times this year. This was her last class of the year, so it is great to finish on a high note. She will get a break now until the Winter Equestrian Festival, and we will aim her towards the Sunday 1.50m classes and some grand prix classes, as well.”

The ESP Holiday & Horses CSI4* concluded on Sunday, but the action will return to PBIEC on Dec. 9 for the ESP Year End Awards show.

Three subsequent shows will follow, culminating with the ESP Holiday Finale from Dec. 29 to Jan. 2, 2022, ahead of the 2022 Winter Equestrian Festival.