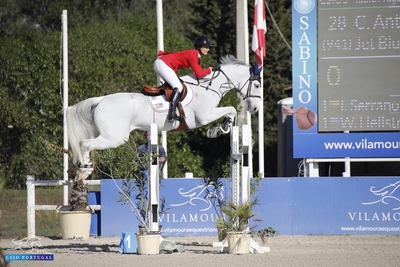 All four riders on the U.S. team were only competing in their second Nations Cup ever, after having ridden in their first just three weeks ago in Vejer de la Frontera, Spain.

“These riders haven’t competed at the North American Youth Championships either,” said Kursinski, “So this two-round team format is new to them and a totally different experience from their normal individual competition. They can’t get this experience at home, so to have them come over to Europe and ride in Nations Cups is so important."

“It was great that we made it into the second round,” said Kursinski. “Now they want to do this again and improve. The only way you can learn is to actually do it. These experiences are what makes them team riders later for five-star competitions and championships. They were a great group of riders to work with, and they are eager to do more.”

GOING first for the U.S. team, Maria Costa, 29 of Wellington, Fla., started off strong with a clear ride – one of only six in the first round – on Presence, and she had 12 faults in round two.

“I thought it was a very good course for the Nations Cup,” said Kursinski. “It was ‘only’ 1.45m, but it was hard to jump a clear round, especially in the first round. It was technical, very delicate, and challenging for sure. I was really proud of Maria being the lead-off rider and bringing home that clear round.”

Second to go for the U.S., Olivia Chowdry, 29 of Denver, Colo., on Balkana du Tillard, had eight faults in the first round and improved in the second round to finish with just four faults.

Riding in the anchor spot, Carly Anthony, 31 of Wellington, Fla., on Jet Blue, had four faults in round one and were able to post a fantastic clear in round two.

“Carly was outstanding and really came back and fought for the second round."said Kursinski. "It was just like you want to see in a Nations Cup ridet.”

The U.S. team finished with 12 faults in round one, making the cut to return for round two out of a 17-team starting order.

In round two, they added another 12 faults for a total of 24 faults and eighth place.

Ireland won with eight faults, while Italy and Switzerland tied for second with 12 faults.