MILL SPRING, N.C.--Woods Baughman of Lexington, Ky., won the CCI 4*-L Eventing National Championship with C’est La Vie 135 on a score of 29.4 following the stadium jumping on Sunday, Nov. 14 in Tryon, while Phillip Dutton of West Grove, Pa., on Z won the CCI4*S after the cross country, also on Sunday. 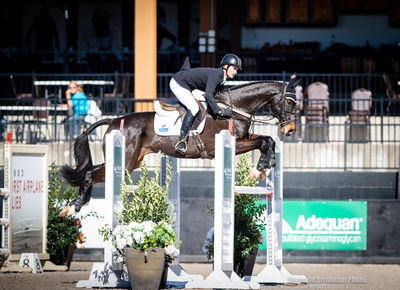 Woods Baughman on Cest La Vie (Photo by Shannon Brinkman)Woods had made a comeback after overcoming a broken back, and he improved from finishing third in 2020.

Sweetening the victory even more was finishing just ahead of his coach, Sharon White of Summit Point, W. Va., on Claus 63, who finished on a score of 36.7 for second after adding .8 penalties for time to their total.

Will Coleman of Gordonsville, Va., on Chin Tonic HS had one rail down to finish third on a  score of 38.0.

Baughman was the only CCI 4*-L rider to go double-clear over the coss-country course set by Captain Mark Phillips.

“On Cross-Country yesterday, he was such a machine," said Baughman. "I wasn’t sure about the time at the end, so I just dropped the reins. I let him do his thing, and we ended up well inside the time. Overnight, I was just keeping him as relaxed as possible, so he didn’t get all tight, especially with it being so cold this morning.”

“HE HAD so much energy left today that I was still holding him back in the Show Jumping," said Baughman. "I felt pretty confident going in. I actually lost control a little bit in the victory gallop, but it’s all good! 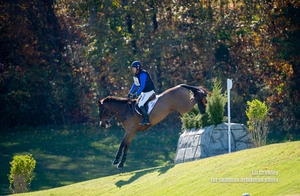 Philllip Dutton on Z on XC (Photo by Shannon Brinkman)“I wasn’t doing so well this morning,” Baughman. “Mia was making fun of me at breakfast because my hand was shaking so bad while I was just trying to drink coffee! He is so genuine and he jumps so well, though, that by the time I was done warming up, I was quite relaxed. I just had faith in my horse and let him do his thing.”

Dutton made light work of the CCI 4*-S track to win on Z, who was having his first outing after the Olympics.

Dutton finished the cross-country, and the event, on a score of 35.6, adding 6.4 time penalties to his show jumping score.

Colleen Rutledge on Covert Rights finished second on a score of 40.6, having added 9.2 time penalties on course, and White on Cooley On Show added 7.2 time penalties to her score to place third on a total of 43.2.

There were no riders within the time, with all three top finishers keeping under 10 penalty points to stay on top.

“He’s a real competitor and loves everything about competing," said Dutton about Z. "He’s certainly not laid back at a show, and he’s always trying to put his best foot forward. It was good for me to get him back out and compete. It was the ideal event and division to bring him back for. It was challenging enough, but it wasn’t too stiff and the conditions were pretty close to ideal. The footing and everything else were spot on.

“It probably rode just a little bit harder than it walked,” said Dutton of Captain Mark Phillips' CCI 4*-S course. “Obviously, he’s a pretty experienced horse, so he was able to step up to the challenge pretty easily. We’ll give him a short break, then gear him up for next year. Ideally, I’d like to maybe head to Badminton next year, so we’ll see how everything goes.”

Boyd Martin of Cochranville, Pa., on Fedarman B had a double-clear stadium jumping round to end up second on a score of 30.2, and Improving from fifth to finish third thanks to a double-clear round in Tryon Stadium was Kendal Lehari  of Canada on Audacious on a total score of 31 points.