MILL SPRING, N.C.--Woods Baughman of Lexington, Ky., on C’est La Vie was double clear cross country to move into the lead in the USEF CCI 4*-L Eventing National Championship at Tryon on Saturday, Nov. 13, finishing in nine minutes and 36 seconds to stay on his dressage score of 29.4. 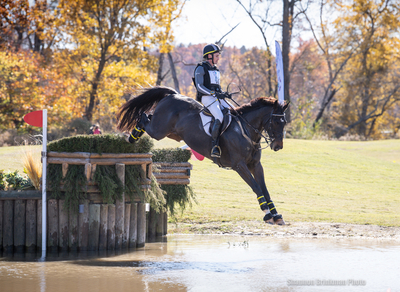 Baughman was the only competitor to finish the course set by Captain Mark Phillips without time faults.

Jumping clear was an accomplishment that only nine entries managed, with five horses picking up 20 penalties and seven competitors failing to complete the course.

“He was fantastic," said Baughman of C'est La Vie.. "I mean, he’s a total powerhouse on course. I set him up for the important combinations, and everywhere else, I just let him run. And then we got to the end of the course, we had that big hill, and I wasn’t exactly sure of my time, because I had that hold on course. As I headed to the hill, I decided not to take any chances, and I just dropped the reins and let him run.”

BAUGHMAN and C’est La Vie have been in almost this exact scenario before heading into Show Jumping in Tryon Stadium, which Baughman thinks bodes well for their round – as long as C’est La Vie remains relaxed. 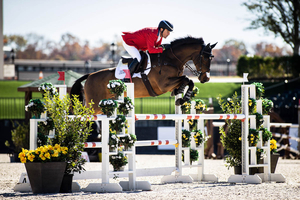 Phillip Dutton on Z  (Photo by Shannon Brinkman)“He’s a pretty solid jumper, so that always helps you feel a little bit more comfortable," said  Baughman of his chances in stadium jumping on Sunday. "It gives us a bit of confidence knowing how he’ll react to that big ring. And the real plan is just to help him stay relaxed and easygoing into tomorrow because he can get pretty uptight pretty fast. And then, he stops his back and can have one behind. It’s just keeping him relaxed through the night and happy in the morning, and we’ll give it our best shot tomorrow.”

For Baughman, the biggest difference between this year’s 4*-L championship contest and last year’s was the orientation of the Cross-Country course, which started at the top of the hill in 2020.

“It was definitely interesting doing the course the other way around this year,” he said. “It had a much different feel than last year, because the hill going down in the beginning kind of set the pace early. This year, knowing that it was kind of lurking over you the whole way around the course, that you’re gonna have to run up the hill at the end, really, you had to be ready, and a bit ahead of your markers with enough force to actually keep coming. It was a completely different style.”

Phillip Dutton of Wes Grove, Pa., brought his Tokyo Olympic mount Z back to competition in Tryon to lead the CCI4*S on a score of 29.2 after posting a double-clear show jumping.

Colleen Rutledge on Covert Rights moved up to second after posting a double-clear to keep their score of 31.4, while Lynn Symansky on RF Cool Play,had one rail down to be in third on a score of 32.2.

“I’m really pleased with Z," said Dutton. "It’s his first run back since Tokyo, and it’s actually his first time off the farm since Tokyo, so I wasn’t quite sure how it was going to be. He was pretty relaxed yesterday, and I just sort of opted for a quiet and easy test. I thought he should jump pretty well today, so I was very pleased with him.”

“It’s always good to have him with me," said Dutton. "Honestly, since Tokyo was in early August, I felt it was a good thing for him to get back into proper work. It’s also good for me in my training to have some goals. We’re not too far off of it, and I think it’s been a good exercise to bring him here and finish the year off.”

Buck Davidson of Unionville, Pa., had four faults on course to lose his first-phase lead, but still is third with a score of 30.1 and stays within a rail’s reach of Dan Kreitl from Indiana, who now holds the lead on Carmango after staying on his dressage score of 27.5.

Ariel Grald on Forrest Gump 124, also added nothing to his total to be third on his dressage score of 27.7.