Will Coleman on Chin Tonic HS leads 4*L at Tryon

MILL SPRING, N.C.--Will Coleman of Gordonsville, Va., and Chin Tonic HS lead the USEF CCI 4*-L Eventing National Championship at Tryon on a score of 26.0 after the two days of dressage competition. 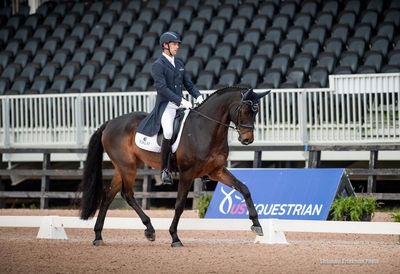 Chin Tonic HS is competing for only the third time in advanced competition, so Coleman said he is aiming for an educational yet competitive experience.

“He’s a very talented young horse,” Coleman said. “He’s very green for this kind of competition, but we feel that he’s ready. He showed some of his greenness in his test, but he has so much quality that he can get away with it. I feel fortunate to be where we are and recognize I’m riding a really good horse in that phase.”

“The main thing we want to think about is just giving him a good run for his future and development, but we’re here to be competitive as well,” Coleman said. “We’re formulating a good plan for him, and then we’ll go out there tomorrow and try our best to execute it.

“IT'S BEEN great here as always,” Coleman said. “Tryon is first-class. The horses get a sense of the atmosphere that you might encounter at big-time events around the world. I think it’s wonderful that we’re able to compete here. Fingers crossed for tomorrow. I hope everyone has great runs and that we have a great day of sport!” 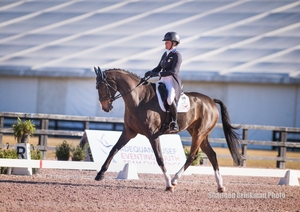 Phillip Dutton of West Grove, Pa., and Z scored 29.2 for second place, while Jessica Phoenix of Canada on Humble GS, is just behind with a score of 29.7 for third.

Dan Kreitl on Carmango scored 27.5 to hold second, and Ariel Grald is in third on Forrest Gump 124 after scoring a 27.7.

“He’s very consistent," said Davidson of Carmango. "He’s very pretty, really quiet, and a good mover. He just really has a presence about him. He’s very reliable in the dressage.”

Showman has never competed over a cross-country course this long before.

“He’s a fantastic jumper," said Davidson. "He’s very brave and honest. He’s never gone this far before, so he can be a little green in the sense that he’s just a baby. I think going past all of these fences that we have to go past earlier in the course is going to be a little bit trickier for him."

“He’s a super nice horse, and certainly not a finished product yet, but he’s a nice canvas to start with." said Davidson. "Dressage was a good start, and hopefully we can just keep getting better through the weekend!”

When not competing, Davidson joined Will Coleman for a little competition on the golf course, making use of Tryon Resort’s Cleghorn Golf & Sports Club.