LEXINGTON, Ky.--Zayna Rizvi of Wellington, Fla., won the 88th ASPCA Maclay National Championship over 175 juniors who had qualified for the finals in regionals after three rounds of jumping and a flat phase at the National Horse Show on Nov. 7. 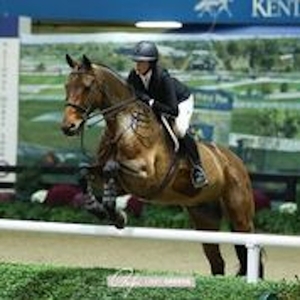 Zayna RizviHer win capped a year of top wins in both equitation and jumpers.

“I’ve had a great week here competing with my jumper horses and moving into the bigger FEI classes, and I’ve learned so much," said Rizvi. "I’ve been working toward this all year so this is a really great way to end our season. Now my horse, Finnick, gets a break until the Winter Equestrian Festival. This win means so much to me. I want to thank everyone who had a part in this and helped me get here today. I am very thankful.”

The course set by Bobby Murphy for the first round incorporated long-set bending lines and two one-stride combinations, one of which would be jumped in both directions, and it demanded a purposeful pace while maintaining control throughout the course.

The  judges were Archibald Cox and Keri Kampsen, who won the ASPCA Maclay National Championship in 1997,

Behind Rizvi in the callback lineup for the flat round, were Grace Debney, Catalina Peralta, Tessa P. Brown and Audrey Schulze.

THE FLAT work included a working walk, trot, sitting trot, extended trot and canter and a flying change of lead in front of the judges going each direction.

After the flat phase, Rizve stayed on top while Peralta moved up to second, Schulze moved into third, Brown was in fourth and Debney was dropped down to fifth for the second round course.

All 24 riders returned in reverse order of preference for the third phase of competition, a second over fences trip.

The course had a number of fences from round one, but in a new track that included a series of bending lines and a long three-stride line away from the gate that made pace a focus yet again.

After the second round of jumping, four riders were tested yet again.

Returning for the test without irons, Brown was the first to show, and she was jumped loose at the third fence, an oxer that was counter-cantered after halting.

Peralta was next to go, laying down a lovely trip.

Second-to-last in the order was Rizvi on Finnick, and she aced the course..

Last to go was Schulze who was respectable but unprepossessing.

So Rizvi who reclaimed her leading position, to win the 2021 ASPCA Maclay National Championship riding the veteran Finnick.

Trained by Missy Clark and John Brennan of North Run, the Rizvi has been knocking on the door of a championship over the past few years, claiming top-three finishes in a number of national equitation finals including the reserve championship in the this year's Hunter Seat Medal and a third place finish in the 2020 Platinum Performance/USEF Show Jumping Talent Search Finals - East.

Her win capped off an incredible year for the 16-year-old athlete, who continues to dominate in both the equitation and jumper ranks.

Placing second place honors was Peralta of Genevea Fla. on Clover, trained by Stacia Klein-Madden and the team at Beacon Hill Show Stables.

Rounding out the top three was Schulze of Ridgewood, N.J., trained by Frank Madden.

“This year has been a bit tough," said Peralta. "I lost two horses this year, family members as well, so it means a lot. Although I didn’t end up with a win I am extremely grateful to be able to be reserve champion and just compete in this class with a fantastic horse like Clover. Stacia is incredible, she has helped me so much in overcoming such difficulties. I’m so grateful for the team at Beacon Hill, they are my family.”

“I wasn’t overly stressed having to go first because I know that I was prepared coming into this week," said Schulze. "It was interesting that the order-of-go came out earlier in the week so I had all week to think about it. I knew that I was ready, I was going to walk the course and have my plan, execute it exactly how I walked, and that’s what I did. It worked out nicely.”

“I don’t think it’s anything special that we at North Run do, it’s kind of what we do all year," said Clark. "Zayna is so well versed in the jumper ring, and my theory is always it’s not a different sport, the equitation ring. We do a lot of flatwork in lessons and we do our coursework, but I don’t think we do anything unusual other than what we do all year. Zayna is a remarkable talent and such a great student, so she makes it easy.”

“It’s such a treat to come here and be exposed to such great courses and such interesting material that Bobby Murphy I know is responsible for," said Frank Madden. "I feel so old sitting up here with two former students - I was involved with Keri Kampsen and her win and Stacia and her win, so I am an old man up here with a talented young rider.”

“I would say certainly forward riding and execution (was the reason for Rezvi's win)," said Cox. "She came in the ring, came around the turn, went from the outgate and started going forward to that first jump. You have to go forward to the first if you want to go forward to them all, and she does.”