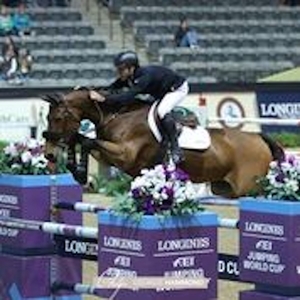 Kent Farrington on GazelleIn the first round, 35 representing 10 countries competed in the World Cup, which was the third leg in the tour.

With the only clean roundin the jump-off, Farrington pllaces first, with Ward on Contagious, the fastest to the four-faulters second and Bluman on Ladriano Z third.

“I only had one rider after me, and I felt as though a neat clear round was a smart play," said Farrington. "I have a very experienced horse, and she has been an amazing horse for me and my career. Robin Parsky has been very supportive of my management of this horse and that is part of what has made her last so long, being able to move her up and drop her back. Today is a great way to gear up for other events. The first round, she was hyper careful so there was a little bit of jockeying around. I thought that the jump off was a good opportunity to let her settle down and go for a cruise and that worked out for me for the win.”

“IT IS GREAT to get back to normal," said Farrington. "I grew up as a junior rider always watching this show. Even when I was riding in it, I would stay and watch the grand prix and watch the high level riders warm-up and try to learn and gain knowledge through what they were doing. It has always been a part of my calendar. I like supporting the best events in America, so hats off to the team here for continuing on through hard times and finding a way to keep it a great event. It will always be on my schedule.“ 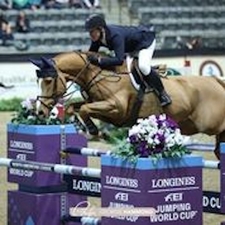 McLain Ward on Contagious “I think that Bernardo(Costa Cabral) is a phenomenal course designer and I am always excited when I see his name on a prize list or a program because I always have confidence that it is going to be a good and fair test with a lot of horsemanship, and we as riders really appreciate that," said Ward. "When I walked the first round, I thought that it was a tough track and fairly delicate. The turn to the yellow oxer, fence six, was really a tough task and I questioned him about it a little bit. There were several other problems and it provided a good challenge. There were a fair bit of horses clear and it made for a nice jump off. “

“Growing up, the National Horse Show was in New York, and it was close to my home and I remember my father winning the grand prix in 1982 very clearly so it was always a very important event to aim towards," said Ward. "Unfortunately, I am now sitting here and thinking about the four times that I have been second. It is a great competition and it has set a very high standard over the years. My hats off over the last two years to the National Horse Show for forging on and running. Last year really was a triumph. I agree with Bill Weeks that as we get back to normal life, we should continue to have these great events.”

“As you can tell, I am not American myself, you can tell by my accent," said Bluman. "I have been in the United States for 20 years ,and this is an incredible country. We are so privileged to be able to live here and I see it as a duty to come to the big shows and make the competitions exciting for the public and for the up-and-coming riders because that is the only way to ensure that these events continue for many more years.”

“It is nice to say that I think that we are finally getting back to normal," said Weeks, Chairman of the National Horse Show. "To have these amazing athletes here, in what I consider to be the finest equestrian venue in the country, and see top level sport is a pleasure.  It does feel as if we are getting back to normal.”

Serving as the Show Jumping Hall of Fame (SJHOF) Year-End Championship, the National Horse Show is the final stop on the East Conference for the prestigious program.

Zayna Rizvi on Excellent won the 2021 junior division, and Vanessa Hood on Lou Lou VLS to victory for the series’ amateur division.

“This class is so prestigious and I know all the riders are so good, so I was really trying to come up with a strategic plan," said Gochman. "I knew that there were some questions in numbers and turns and which I could do, especially to the last line. I watched Grace go inside in six strides and my trainer Ken Berkley looked at me and said ‘Try it!’ I was like ‘Okay, sounds good!’ I knew my horse had a huge stride down the first line and I really wanted to go for it because if I was going to commit, I had to commit to the win! I went for seven strides and my horse came up with it and was fantastic and was able to do it with the turns. It was a really fast course that had my blood pumping. It was a lot of pressure and I was slightly nervous, but it was super fun and I can’t be more grateful for my team and horse.”