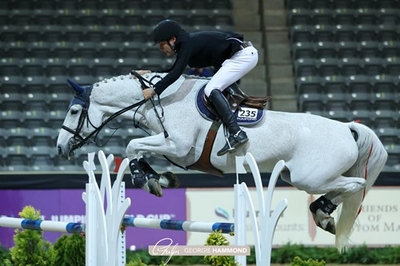 Karl Cook on Caillou 24 (Photo by Georgie Hammond)Earlier in the afternoon, McLain Ward rode Catoki to beat a 36-horse field in the $36,600 International Speed CSI4*.

Canadian Erynn Ballard on Jack Van’t Kattenheye was the first to go clean in the Welcome Stake, and two trips later, Ward would force a jump-off after turning in a clear round on his Tokyo Olympic Games mount, Contagious.

WARD WAS the first to go clean in the jump-off, finishing in 32.96 seconds.

Next, Engle on Dicas was clean but slower, finishing in 35.62 seconds.

Vale on Elusive finished behind Ward in 33.27 seconds, but Farrington on Austria 2 was faster than Ward, tripping the timers in 31.78 seconds.

Then Cook blazed to a new leading time of 31.47 seconds for the win with Farrington second and Ward third.

“My year started off really not the best," said Cook. "I had a little bit of a rocky start with some soundness issues that were out of the blue and we couldn’t foresee, which was kind of annoying. Once we got out of that rut, I had to make up for the lost time. the horses have been great and I am so grateful to have the horses that I have, they make it so much fun to be out there.”

“I think most of us are pretty experienced riders and we are doing the round that is best suited to our horses," said Farrington. "My horse is very different from Karl's, so I had a little bit of a different strategy on the choice of striding. We had different approach turns on the oxers. He could do a short turn from one to two. I went a little bit wider to set up for the four-stride after. I thought that it was a very good class. I did not think that Karl was going to try that hard! I was sort of banking that he would save a little for the Grand Prix and that did not work in my favor today. It was a great competition and Karl had a great round tonight.”

“When we made the schedule following Contagious getting home from Tokyo this seemed like a nice event for him to wrap up the year," said Ward. "It is a prestigious event and a World Cup Qualifier, and he has performed well at this event before, and I knew that it was going to be very good footing, which was certainly a factor. I thought that he jumped the first round super. I thought that the first round for the opening big class was challenging enough with a good result. In the jump-off, from one to two I was not as aggressive as the other two. I went earlier in the jump-off and I wanted to put a strong round in and not take too much out of my horse. These guys are good and they got me, but I am thrilled with my horse and looking forward to the rest of the week.”

Ward had the quickest clear time of 48.61 seconds to win on Catoki.

Second was Cook on Fecybelle, clean in 49.16 seconds, and Catherine Tyree was third on Bokai, who crossed the finish line in 51.31 seconds.

In the $5,000 Junior Jumper class, Mimi Gochman won on Celina BH, and Skyler Fields rode Cornetta to victory in the $5,000 Amateur-Owner Jumpers.