MILL SPRING, N.C.--McLain Ward on Catoki won the $36,600 International Jumper Accumulator class, and Todd Minikus on Amex Z won the $72,900 Welcome Stake in the evening at the Washington International Horse Show, held this year in Tryon due to Covid, on Oct. 28. 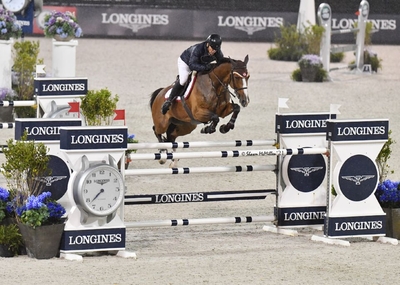 This year, he entered Tryon Stadium for the $72,900 Welcome Stake having had nearly a month off due to an injury.

“I had a horse rear and fall on me, and I haven’t ridden in almost four weeks,” said Minikus, of Lake Worth, Fla. “The day before yesterday was the first time I’ve ridden since the injury. The horse came completely over on top of me and smashed my pelvis, but I’m very fortunate nothing broke."

“I have to take my hat off to Brooke Rainey and Danny Balzani who take care of Amex Z and Jonathan Williams and Riley Delbecq who rode her the past month while I limped around,” he continued. “They did an awesome job of having her ready for me to ride.”

Minikus, who is known for going for broke in the jump off, did just that.

Minikus beat a field of 41 contestants.

In the first round, 17 went clean, but with three riders electing to withdraw, 14 returned for the jump off.

Minikus on Amex Z crossed the timers in the fast speed of 29.68 seconds.

IN THE AFTERNOON class, cooler temperatures and pouring rain didn’t stop McLain Ward on Catoki from winning the $36,600 International Jumper Accumulator class, finishing with 65 points in a blazing time of 46.82 seconds. 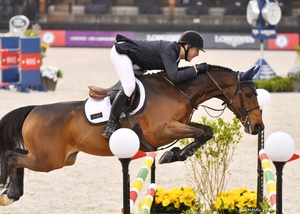 McLain Ward on Catoki (Photo by Shawn MacMillan0“I only get on Catoki a couple of trips out because he’s so aggressive, so in the pouring rain it’s a perk not having to get on him any earlier,” said Ward.

“I was just commenting, particularly in indoors, we used to have a real speed division and an accumulator was a little bit of an egg and spoon class," said Ward. "It was smaller, typically. It’s interesting that the fence height is now 1.45m from the second jump on. It’s a different type of competition but it’s fine, that’s how the sport is evolving and it’s nice to have a good, competitive speed horse to do these classes.”

“I think the WIHS organizing committee should be commended for running the show the last two years,” he said. “Obviously, most of the other indoor events in the COVID period has been canceled or postponed. The WIHS organizers made huge efforts to make these events happen, albeit in a little bit of a different setting. I know there is a lot of work being done trying to see where the future location of the event will be. I know they want to try to stay in the Washington area and I hope that they can find a great location because it’s a great event.”