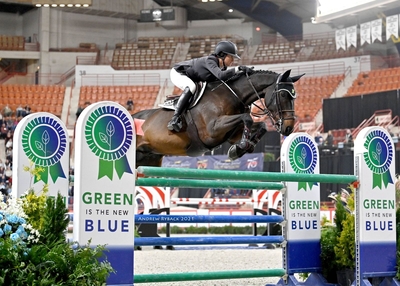 Cassandra Kahle on Pyrenes de Louzes (Photo by Andrew Ryback)From a starting field of 19, only Kahle, Kaitlyn Williams, Laura Chapot and Devin Ryan qualified to return for the jump-off.

Chapot was the first to return in the jump-off, but a rail down with Chandon Blue would leave the door open for the other three.

Riding her own Cassio Melloni, Williams raced through that door, stopping the clock in 37.131 seconds, but her lead was short-lived, as Kahle was the next to return, and she made short work of the track, shaving more than a second off of Williams’ time to finish on 36.012 seconds.

Coluccio on Egaliniwas the last to go, but three rails down placed him fourth and secured the win for Kahle and Pyrenes de Louzes.

Williams and Cassio Melloni finished in second, while Chapot and Chandon Blue was third.

“IT FEELS pretty surreal!” said Kahle of her win. “I’m very dedicated to the sport. I love it. I do it every day, so it’s a lot of ups and downs, a lot of long days. To have a day like this come together makes it all worth it. This is such a special show. They brought the crowd, and I think the whole atmosphere just makes it that much more surreal. It’s just really quite a cool show.”

Kahle has been partnered with “Pyro” since 2016, but prior to then, she had little experience in the jumper ring, making Saturday night’s victory all the sweeter.

“I didn’t show jumpers as a junior, so walking right into the 1.40s and the open divisions was a learning curve,” said Kahle, who rides for Emil Spadone's Redfield Farm. “When I started riding Pyrenes de Louzes, I had just started doing the jumpers. Really, he taught me a lot. He jumped a lot of great rounds for me. He told me when I was doing something wrong. Even though I may have had mishaps, he still tries every time he comes out, and he’s amazing.”

Kahle and the 18-year-old Selle Français gelding made their successful FEI debut at the PNHS in 2016, but, as Kahle described, “from there I had a little bit of a bumpy road getting to know indoors.

“Being able to come back here and have a strong show like this and a result like this was really extra special,” said Kahle. “I’m just so lucky. I don’t want to sound clichéd, but it takes a village. Everyone from my groom, Oscar Teranzo – he’s been with me for two years now, and he really is just so dedicated and hardworking with these horses. He takes a lot of pride with it. Dave McGarry is our show manager, and he’s worked for us for many years. It’s a great horse show, so we had a lot of customers that were here, the whole barn was here so it’s a fun celebration.”