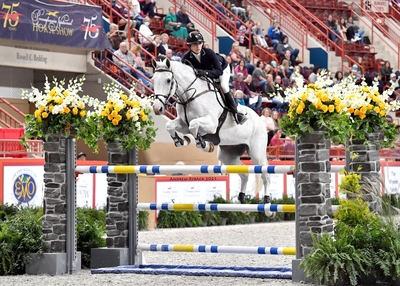 Kaitlyn Williams on Cassio Melloni (Photo by Andrew Ryback)From a 23-horse field, nine entries advanced to jump off over the Manuel Esparza-designed course.

When Williams went in the jump-off, the time to beat had been set at 31.154 seconds by Wednesday night’s winner Chapot, this time on Chandon Blue, and Williams was 4/10s of a second faster, finishing in 30.765 seconds.

Chapot on her Wednesday-night-winning mount, Calafornia, was the final entry to return for the jump-off, and she gave Williams a real run for her money, stopping the clock less than one-tenth of a second behind Cassio Melloni to take second with a time of 30.812 seconds.

“WE RAN TO the last fence, and he just does his job every time,” said Williams, 21, of Wayne, Pa. “He is just the most unbelievable horse ever – probably one of my favorites that I’ve had so far. He’s super experienced, so I fully trust him no matter what, and he’s saved me so many times. He’s super fun.”

While Williams has previously competed at the PNHS in the Prix des States and the junior hunters, this year marks her first year competing in the open jumpers at the show, thanks to the newly added 1.30m and 1.40m divisions.

“I really like this show because, obviously it’s a qualifying show, so it’s fun to show, but now it’s great for these types of jumpers,” said Williams. “It’s nice to get inside and see how they’ll be. It’s really special with the crowd and the bright colored jumps.” 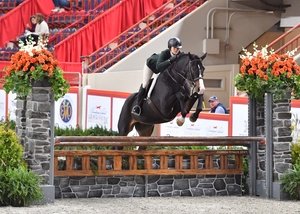 Kelly Tropin on Chablis (Photo by Andrew Ryback)Tropin had two wins over fences to win the Amateur-Owner Hunter 3’6”, 18-35 division championship, marking the third time that Tropin and the 13-year-old Württemberg gelding have earned the honor.

“I’m really, really proud of his results today,” said Tropin of New Canaan, Conn. “It’s his third time being champion here, and he’s been reserve twice. I’m really proud about the longevity of his career and keeping him going.”

“We always want to do well at indoors, and Harrisburg is the one that I always prioritize,” said Tropin. “I love this show. Chablis goes really well here. When we were here last time in 2019, he won all four jumping classes. He got three 92s and a 94. So, I felt a lot of pressure coming back this year."

“But I knew that it wasn’t going to be a repeat performance because that was going to be really hard to achieve,” said Tropin. “Then in the first round, we had a rail at the last jump, so that kind of stressed me out a little bit, especially since they removed a jumping class. I was really proud of the handy and that we were able to come back. I was trying to be calm, and we got a 90 and won the class. I was really happy about that, having it go wrong and being able to come back.”

Finishing as the reserve champions in the Amateur-Owner Hunters 3’6”, 18-35 was Caroline Ingalls of Rancho Santa Fe, Calif., on her own Concerto.

In the Amateur-Owner Hunters 3’6”, 36 & Over, the championship was won by Sadrian on Rafiki, and the reserve champion was Dorli Burke on Classic.

“Rafiki is the best,” said Sadrian of the 11-year-old Hanoverian gelding. “He's kind of like an old soul, he just knows his job. He wants to be good, so it makes it a little bit easier than some horses. He wants to be a gentleman and do it all right. It’s so nice walking in the ring because he gives you such confidence as an amateur which is really special.”

The championship in the 3’6” was the first of three tricolors for Sadrian on Thursday.

After topping the division with Rafiki, Sadrian went on to do the same in the Amateur-Owner Hunters 3’3”, 36 & Over with Blink.