HARRISBURG, Pa.--Laura Chapot of Neshanic Station, N.J., rode Calafornia to win the $10,000 1.40m, as well as placing third and fourth in the class on Wednesday, Oct. 20, to begin the Open Jumper divisions at the 75th Pennsylvania National Horse Show in Harrisburg. 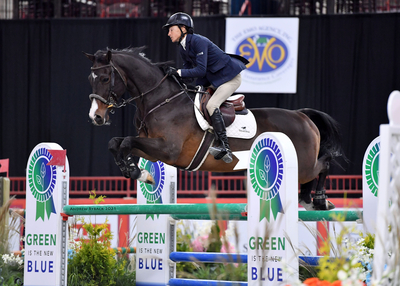 Laura Chapot on Calafornia (Photo by Andrew Ryback)Chapot, on the 14-year-old Dutch Warmblood gelding, owned by Laura and Mary Chapot, was the second of 22 entries to compete in the one-round speed track set by course designer Manuel Esparza of Mexico.

With 20 horses still to follow Chapot on Calafornia, it seemed there would be plenty of opportunities to beat her time, but no one would come close to her 55.384-second finish.

Second place with a time of 57.592 seconds went to Hadden Frost of Upperville, Va., riding his own Finou 4.

Frost is better known to steeplechase fans as a top rider for Jack Fisher, having won on horses such as Timber Horse of the Year Doc Cebu.

Chapot also finished in third with a time of 58.354 seconds aboard Chandon Blue and fourth in 60.766 seconds with Diarado’s Flying Dutchman, both owned by Mary Chapot.

“HE'S A SPEED specialist, and he always been good at this venue,” said Chapot of Calafornia, who also finished in second in the $10,000 1.40m opening class at the 2019 PNHS. “I was really pleased for him to be able to walk in today and put in such a good round. He's been very consistent. He's gotten more and more consistent over time, and we've really gotten to have a very good partnership now.”

While Chapot has been coming to the Pennsylvania National Horse Show for decades, the introduction of 1.30m and 1.40m USEF 6* Jumper classes, rather than previously held, FEI-sanctioned classes, presented a new opportunity for her.

“We really loved the idea of having the two divisions, and it really gives us a great opportunity to bring the young horses here,” said Chapot, who first competed at the PNHS on ponies in the 70s and 80s. “I brought two young horses, and it's just nice for them to get around over a little bit of a more reasonable-sized course, rather than coming in the first time here and having to jump the top of the standards. A lot of horses are a little bit set back by being indoors with the coliseum feeling, where the stands and the people are above them. That can be very distracting to them. So, it's really great that they've given us this opportunity to give those horses a little bit of experience."

“Harrisburg is a very big tradition in our family,” said Chapot. “We love this show, and this is really the only indoor show I go to. Now, it's the best venue for the horses. The stabling is good, and the improvements they've made this year with the expansion of the schooling areas has made a big, big difference. I think that the feedback is going to be very good.”

In his first appearance at the PNHS, Tynan tripped the timers in 58.883 seconds for the win.

Second place went to Victoria Colvin who stopped the clock in 59.310 seconds on Gemino, and Kelli Cruciotti Vanderveen riding Isabella van de Zuuthoeve finished third on a time of 60.241 seconds.

“The show is fantastic,” said Tynan, who is based in Wellington, Fla. “The people are super, and the jumps are fantastic.”