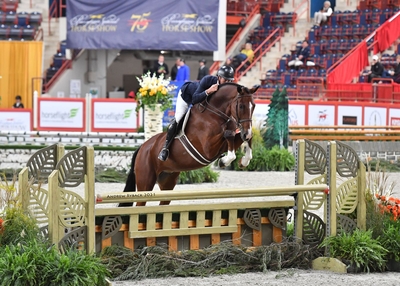 Hunt Tosh on Cannon Creek (Photo by Andrew Ryback)With a clean sweep of the High Performance Hunter over fences classes and a second-place finish in the under saddle on Cannon Creek, Tosh was also named the 2021 Leading Hunter Rider as the competitor with the most points in one division.

For his classic riding style, Tosh was additionally recognized by the judges as the 2021 recipient of the Kenneth Wheeler Style of Riding Award.

“When you look at the trophies at the names of the horses, the number of great horses that they’ve had come here, it's incredible,” said Tosh, of Alpharetta, Ga. “I’m so lucky to ride for the Wheelers on some of those great horses. Then obviously to win the Kenny Wheeler Style of Riding Award today with him passing this year, it was very special.”

Tosh and Cannon Creek’s success at the PNHS comes as part of an already banner year that included victory in the United States Hunter Jumper Association (USHJA) International Hunter Derby Championship in August, and for Tosh, Cannon Creek’s accomplishments bear a striking resemblance to another PNHS grand champion.

“CANNON CREEK has always reminded us of Lone Star so much, first with winning Derby Finals, and Lone Star also did this here,” said Tosh, referring the horse he rode to wins at both the International Hunter Derby Championship and the PNHS in 2010. “To have Cannon Creek follow in Lone Star’s footsteps again is special." 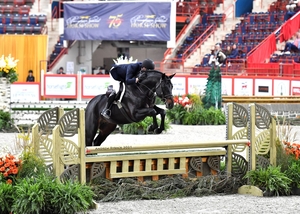 Scott Stewart on Charlemagne (Photo by Andrew Ryback)“Cannon Creek’s been phenomenal all year,” said Tosh. “He’s got such a good brain to begin with. He’s very simple to prepare and simple to show. He really makes my job easy. He tries not to make mistakes in the ring, so he’s just a great show horse.”

While Tosh is now no stranger to success at the PNHS, it was not always that way.

“It’s the history of being here that’s special,” said Tosh. “I came here as a little kid on a horse that probably shouldn’t have been here and gave it a shot. I did Medal Finals on a paint horse that was a super sweet horse, but I think it was a disaster. It was definitely not good. I had no business being here.”

“The show this year is great,” Tosh said. “Pat Boyle did a great job revamping Harrisburg. The footing was great. The schooling areas are so much nicer and give us more room. The jumps are beautiful – just everything had a true facelift since we were here two years ago. The whole horse show was run beautifully, and it was great being here.”

Finishing as the reserve champions in the High Performance Hunters behind Tosh and Cannon Creek was Greg Crolick on Handwritten, owned by Jon Cotton.

In the High Performance Conformation Hunters, the championship went to Scott Stewart on For Always, owned by Dr. Betsee Parker.

The reserve championship was awarded to Gabriel, ridden by Victoria Colvin and owned by J T Farm.

In the Green Hunter 3’6”, it was again For Always who rose to the top of the 24-horse division to earn the tricolor.

“Ken Berkley and I bought him when he was 4, and he did the pre-green just a few times before Betsee Parker bought him at the beginning of last year,” said Stewart of the 7-year-old Oldenburg gelding. “He won quite a bit before we stopped for COVID. We reinstated him, and he was really good in Florida; he won a lot. He’s really fun to ride. He’s really a trier over the jumps as you can see. He’s like a big pony to ride.”

With two wins over fences, Stewart and For Always also earned the Grand Green Hunter Championship.

The reserve championship in the Green Hunter 3’6” went to Jimmy Torano on Laskano, owned by Isalou Inc.

Stewart earned a third championship in the Green Conformation with Charlemagne, also owned by Parker.

The reserve championship in the Green Conformation went to Gratitude, ridden by Christopher Payne and owned by Still Water Farm LLC.

With 32 entries in the Green Hunter 3’3”, the division was divided into Section A and Section B.

The Section A championship went to Corragio, ridden by Cassandra Kahle and owned by Redfield Farm.

In Section B, it was Blue Moon, ridden by Heather Williams and owned by Joey Roman, that claimed the championship.

The reserve championships in Section A and Section B went to Alistaire, ridden by Jennifer Bauersachs and owned by Lannie Lipson, and Bettina, ridden by Eleanor Kunsman and owned by Glen Eden LLC, respectively.