FAIR HILL, Md.--Boyd Martin of Cochranville, Pa., who said he'd been trying to win a 5* for a long time, finally succeeded and became the first American to win a CCI5*-L since 2008 when he rode On Cue to win the inaugural Maryland 5 Star at Fair Hill on Sunday, Oct. 17. 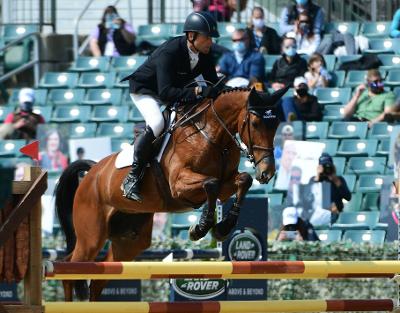 Boyd Martin on On Cue (Photo by Allen MacMillan)Martin was third after cross country behind world number one Oliver Townend of Great Britain and Tim Price of New Zealand, but the three of them were only one rail apart going into show jumping.

"I was hoping to finish in the top five, but Lady Luck was on our side," said Martin.

Martin was the first of the three to go and was clean, then Price had a rail down, and Townend, last to go as competitors returned in reverse order of placings, also had a rail, giving Martin the win by one tenth of a point.

Martin on On Cue finished on his dressage score of 25.0. while Townend on Cooley Master Class finished on 25.1, with Price, 28.3, third.

Martin and On Cue, a 15-year-old Anglo-European mare owned by Christine, Thomas, and Tommie Turner, turned in one of only seven clear rounds from the 34 that qualified for show jumping from the 45 starters in the 5*.

“TO BE QUITE frank, Oliver and Tim own super-duper jumpers," said Martin. "On Cue really gutted out and jumped around. I think Lady Luck was on our side. We bumped and thumped a few poles, but I never heard one come down. I couldn’t believe that I got a clear round. I would have been happy with third or second, but winning is a great privilege. Oliver and Tim are two riders that I’ve sort of idolized and looked up to, and I learned a bit from their mentality and their championship ideology. Today was On Cue’s day, and it’s great to win it.” 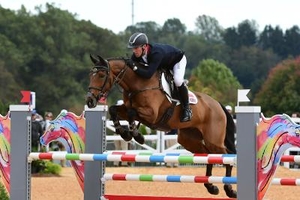 Oliver Townend on Cooley Master Class (Photo by Allen MacMillan)“Coming into this thing, I thought I had a chance just because she was really good at Kentucky this year and was sort of my backup horse for the Olympics and was fit for that,” Martin said. “I knew there was a chance but that it would be very, very competitive."

“I think obviously you want to bring out a really good athlete for any 5 Star, and I think this event’s going to evolve in years to come,” he said. “It’ll probably be the world’s greatest 5 Star. This year already established it as a world-class event. It was just fantastic.”

“I have so much respect for Boyd,” Townend said. “We always have a conclusion with a few words between myself and Karyn [Shuter], who runs the show with me. When I got off, we said we were very happy with how our horse jumped. We’re very happy with Boyd, too. Some days are your days, and some days aren’t your days. Today was Boyd’s day." 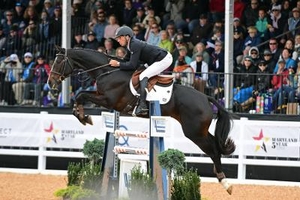 Tim Price on Xavier Faer (Photo by Allen MacMillan)“It does show people that we are normal people, and that you can make it to the pinnacle of the sport,” Townend said. “That’s the message I want to get out to any kid that’s thinking, ‘I can’t do it. I’m not from a wealthy background.’ You can make it to the top of the sport, and it is very possible. I’m very proud of Boyd, Tim, and myself to have worked hard and thankfully be once again sat [on top].”

“I’ve just been so grateful to have another competition at this level, even in its early 5 Star stages,” Price said. “I’m excited to see what comes in the future here.

“I brought a horse myself that I felt was going to be very capable of the cross-country,” Price said. “That’s the place where you can really fall out of a competition or stay in the competition, so I felt with a course designer like Ian Stark and from the reputation I’ve heard this place has with its undulations, I brought a horse that could go around. Having the second rail is not a great beginning to your show jumping round, but he’s a trier. He’s a very simple horse; if I get him to the fence the right way with the right energy, we can get away with it most of the time. I’m very pleased with the result and just to be up here again with these boys.”

"I think this was a wonderful effort for a first 5 star," said Townend.

All three felt that cross country course designer has done a great job for a first time in a brand new venue, but that he had erred on the side of conservative on the last third of the course, resulting in nine horses going double clean.

"I expect that next year he'll build a bigger combination towards the end of the course," said Martin.

The top three were well ahead of the rest of the field, with fourth placed Jennie Brannigan of West Grove, Pa., on Stella Artois finishing on 31.3, with Will Coleman of Gordonsville, Va., on Tight Lines fifth on 32.2, and Lauren Nicholson of The Plains, Va., sixth on 32.9

KURT MARTIN finished the CCI3*-L on his dressage score of 21.1 after a fault-free show jumping round on Sunday on D.A. Lifetime. 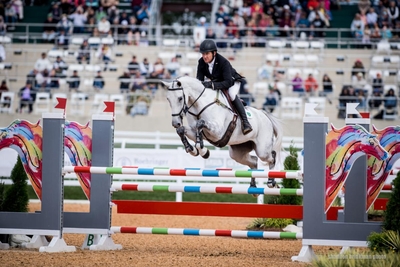 Kurt Martin on D.A. Lifetime (Photo by Shannon Brinkman)Martin maintained his spot on the top of the leader board throughout all four days of competition to win the USEF Eventing National Championship and a $7,500 portion of the $25,000 purse.

Although 35 horses returned to the Main Arena for their final showjumping test after Sunday’s second horse inspection, Martin was one of only eight riders who put in clear rounds over the 14-effort, 1.20m course designed by Krome.

“It sounds amazing,” Martin said of his 2021 National Championship title. “I wanted this so bad, and I’m glad that everything came together this weekend for all involved."

“Competing here has been amazing,” he said. “I’ve been to the old Fair Hill, but coming here, I didn’t know what the course would be like. I didn’t run the test event. I heard that it was going to be a difficult cross-country course regarding the terrain, but I didn’t know how things were like everybody else. I feel like this went pretty easily, quite honestly. The horse went well, and everyone was so kind.”

Hannah Sue Burnett, who was fourth after Saturday’s Cross Country, jumped to a second-place finish with 0.4 time faults in show jumping on Carsonstown, to finish on 28.1.

“We’ve had Carson for a couple of years, and he’s a really special horse,” Burnett said. “He’s grown a lot physically and mentally since we’ve gotten him. He’s quite a big horse, and he’s a very big mover. It’s taken a bit of time to produce him, but he was really wonderful and performed great under pressure. I was really happy with him.”

Townend rode Ulises to place third after clear rounds Saturday and Sunday in the CCI3*-L to finish on his dressage score of 29.4.

A total of 20,886 spectators attended the Maryland 5 Star at Fair Hill over its four days of competition,

“When we first started the event for the inaugural Maryland 5 Star, we hoped we would get the support and participation of the international athletes as well as the Americans,” President and CEO Jeff Newman said. “I just want to say a huge thank-you to Oliver, Tim, Boyd, and all of the riders who have participated in this year’s event. Thank you so much for coming to Cecil County, Maryland, and we hope you come back for years to come.”